What “Fireproof” and “Twilight” Have in Common

What “Fireproof” and “Twilight” Have in Common November 24, 2013 Suzanne Titkemeyer 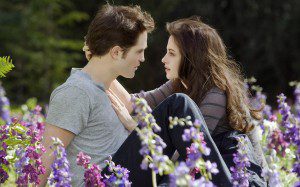 During my undergrad days, one of my friends convinced me to read the Twilight series. At first I rolled my eyes at the “vampire books,” but I did read them— flew through them, really.

I strongly, strongly identified with Isabella Swan– but when I tried to explain it to my friends, all that I could come up with was that “we were both clumsy.” My friends laughed at me, or rolled their eyes, so eventually I shut up about it. I was never able to figure out exactly what it was about Bella that tugged at me so much. I knew it had something to do with her relationship with Edward– I was frequently able to draw direct parallels to my relationship with John*.

When our relationship ended in disaster and I realized not terribly long after that our relationship had been abusive, the connection between Meyer’s books and my relationship hit me square in the face. I’d identified with Bella because she was in love with an abuser. She felt the same way about her abuser that I’d felt about mine. She’d used all the same exact justifications, the same coping mechanisms, everything. Everything was ok, everything was fine– after all, Bella had gone through the same exact thing with Edward, and they were the perfect couple.

I remembered trying to explain this sentiment to a friend, and the best thing I could come up with was that our relationship had a lot of “passion,” and that while it was a “roller-coaster,” I would be “bored with anything less.” She stayed mostly quiet, but I could tell that she disagreed with me– I just didn’t fully realize about what. Now I knew. While Bella and Edward’s relationship had parallels with mine, the abuse John* put me through was so much worse. Everything he ever did was a tactic to control me, to get me to comply with all of his commands, no matter how extreme– even if he had to scream at me, had to physically hurt me. And it worked.

I don’t recall exactly at what stage John* and I watched Fireproof together, but it was sometime after he’d proposed. One of the married couples from church had loaned it to my family, and it was being hailed all over my college campus as a relationship-must. Its accompanying book, The Love Dare, was making the rounds among most of my friends, and was touted as one of the best books written on Christian relationships. I didn’t think that my relationship was struggling, but I was an avid believer in having the tools before you needed them, so I figured it couldn’t hurt.

After the movie ended, John* was upset. He pulled me into the hallway leading to my room and demanded that I explain to him what that had been all about. “Are you trying to say that I’m like that? That I do that? You think I’m some kind of a jerk like he was?”

And I protested, no, no, of course not, I hadn’t seen it yet, I didn’t know what it was about– and, after all, it was really the wife’s fault. He was just responding to her indifference and disrespect. I didn’t recognize it at the time, but fear was tingling in my fingertips and wrenching my stomach. I could feel his fingers clamping around me arm, I watched as rage enters his eyes.

Last week, one of my favorite bloggers, Sarah Moon, live-tweeted her viewing of Fireproof and Courageous. Reading through what she said brought that memory back, and it was almost impossible to stop myself from re-living the experience of looking into his eyes and knowing that he was capable of beating me if he felt like it. One of the scenes she highlighted– the part where Kirk Cameron’s character backs his wife up against a wall while he’s screaming at her– I remembered vividly. I remember it in a way that I don’t remember the rest of the film. I can still recall the basic plot and my mother saying something about how Cameron’s wife stood in for the actress during the last kissing scene, but everything pales in comparison to that particular scene.

I remember the exact way I felt while I watched Cameron’s character scream at his wife. I remember seeing the expression on the wife’s face, I remember forcing myself not to shrink away from John*. I remember wanting to stop the movie– right then– and go do something so I could eliminate the anxious, twisted feeling that felt like a horrible presence in my head, taunting me.

But I also remember the way I felt after the movie ended. I remember what I believed about my relationship with John* after it was over. I adopted what the scriptwriters and producers had just spent the last 90 minutes trying to convince me of– that all relationships, even ones that are emotionally and verbally abusive– need work, that both people have to participate, that you should never, ever give up no matter how bad it gets. They put an abusive relationship on that screen and got me to believe that lie that if I just worked, if I just dared, that I could fix my relationship. Leaving him wasn’t an option– that was only what the “world” (and, apparently, in Fireproof-land, the “world” is exclusively made up of black women) would try to get me to abandon my relationship. But that was not loving. That was not what a Christian would do. No, a Christian woman who is being emotionally and verbally abused by her partner will stick by him and give him one more chance . . . and then another . . . and then another . . .

John*, as a highly skilled manipulator and abuser, didn’t really need that much help in making sure I remained submissive and compliant. He didn’t need help– but he got it anyway. He got it from dating books and purity manuals and the Twilight series and Sherwood Baptist Church. And I’m realizing that one of the answers to the question “why don’t you just leave your abusive husband/boyfriend?” is to point at all the things in American culture that scream at women don’t leave him, it’s not that bad, if you just work and do what he says things will get better. It’s in our most popular books, it’s in our movies . . . and it is a deeply held belief in Christian culture, too.

In all of the dating and relationship advice books that I’ve read, in all the sermons I’ve listened to about marriage, it is extraordinarily rare to hear anything that could help a man or woman in an abusive relationship. Abusive husbands and the wives they hurt are invisible. No one wants to talk about them. It’s a hard, desperate reality. And so, a pastor gets up on Sunday morning, delivers a message for married couples, and ignores the fact that if his church has 50 married couples, 10 of them are physically abusive– and half of these people are being raped, usually in a degrading way purposefully intended to humiliate them.

I know this isn’t a reality we want to talk about. I desperately wish I could live in a world where none of these things happen.

But, the reality is that one of the biggest reasons why women are abused and raped is that we never say anything. And if we do say something, it’s to create a movie about an abusive husband and tell the wife that leaving him would be wrong.

November 24, 2013 Quoting Quiverfull: Requiring Obedience?
Recent Comments
15 Comments | Leave a Comment
"This is late, partly bc of my preoccupation and partly bc I'd been slowly reading ..."
Jennifer Serena’s Serenity – Luxury Hotel, Birthing ..."
"Thank you for your commitment to truth and love, Suzanne. Best wishes to you and ..."
Meredith Anne Not a Goodbye, More of a ..."
"For what it's worth, I've learned a lot from you about a Very Creepy movement ..."
Gwen Pryce Not a Goodbye, More of a ..."
"Unfortunately, this kind of satire (if it even is satire) is what gives Christianity the ..."
Emily Is Biblical Gender Roles a Big ..."
Browse Our Archives
get the latest from
Nonreligious
Sign up for our newsletter
POPULAR AT PATHEOS Nonreligious
1