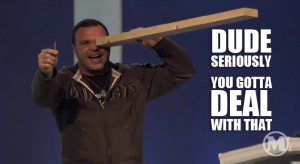 Recently Kevin Swanson, radio babbler and righteous rabblerouser against all things not homeschooling fundamentalist Biblical patriarchy has been making more of an ass out of himself than usual. It’s not merely due to the fact that he has a new book to flog about and promote by calling everyone that doesn’t agree with him an ‘Apostate’, a title that is also a big part of the title of his new book. Oh no, Kevin seems to be off the internet deep end this week.

He’s attacked some of No Longer Quivering’s great friends and authors: Heather Doney of Homeschoolers Anonymous, Homeschooling’s Invisible Children and Becoming Worldly, Kathryn Joyce author of Quiverfull, The Child Catchers and many articles in national publications (Salon, The Nation, Huffington Post and others), Ryan Stollar of Homeschoolers Anonymous, Vyckie Garrison founder of NLQ, Libby Anne of Love Joy Feminism, and many others…

Kevin has been saying some very harsh things in such blog postings as one I quoted tonight for NLQ – Trolls Spew, Silly Women, and Sons of Belial on the Internet Yep, not so much love of Christ in that title, is it?

I’m going to attempt to translate/answer his blog posting here, without using too many emotional nasty spewing words, unlike some coughcough*KevinSwanson*coughcoughcough people do.

Occasionally, I take a foray into the fray of the internet wars to see how the sons of Belial and the silly women (who creep into people’s houses via their blogs) are “working things out” in their theological meanderings. I thought I’d comment.  I’m not speaking of anybody in particular here. . . only assessing a whole lot of troll spews and unsavory bloggish communications.

In other words he’s either bored at work or innately curious as to what those that don’t slavishly hang on his every word as saying about him. Or he’s just trying to scare up something to discuss on that show of his. Self-Googling is the sin of pride.

The errors are multitudinous.

i.e. not everyone agrees with him.

1. People want to choose the wrong epistemological authority, which is usually themselves or the zeigeist.  They usually want to assume that the liberal press maintains a higher respect for truth than the Scriptures and all those “ignorant, horn-rimmed bespectacled” folks who like to quote Scripture.  They shudder when they see a Bible reference (several below).

Please point out exactly where you’ve seen people openly assuming the press has a lock on truth over the Bible. You can’t.

The Bible references that most thinking people shudder over are those pulled completely out of context and twisted to suit manipulative purposes. If you weren’t misusing the Bible to beat people up with then there would be much more reference for the Bible and scriptures. It’s not your own personal weapon.

2. I also find moral outrage everywhere. I’m always a little surprised when those who have abandoned all basis for absolute ethics, get all red-faced and huffy about their moral opinions that have no real basis in revelatory law.  Everybody seems to be very outraged about some moral thing or another (with very little if any basis for absolutist ethics, seeing as they left law somewhere back there for grace).

How does he know that others have abandoned all basis for ethics? Because they don’t think he is the most mostest righteous dude this side of Jesus ever? Anyone following the goings on by prominent Christians in this world would be outraged. Trying to deprive the poor of food and access to health care? Busy disenfranchising large portions of the population? One of the few very famous Christian patriarchs that seems to have any clue or love for people is Pope Francis. Swanson would be a much better person if he only emulated the Pope and not Rush Limbaugh.

A fair proportion of internet opinionators tend to lose all sense of proportion when it comes to morality, usually assuming again that the politically correct sins of the day is the appropriate standard of right and wrong (for now).  We believe that Scripture bears out that some sins of themselves and by reason of several aggravations are more heinous in the sight of God than others (Ezek. 8:6, 13, 1 John 5:16, Ps. 78:17,32, etc.)  Thankfully, the Bible provides us with some sense of proportion when it comes to sin.

No, it’s not that silly buzz phrase “politically correct” that the internet opinionators apply as their standard. Most seem to apply the basic ‘right’ of being compassionate, caring for their fellow man, wanting to do what is right for everyone, not just some elite people thumping the Bible and throwing condemnation on others.

Yes, indeed, the Bible DOES provide guidance about sin. It even says that in the last days there will be tons of false prophets tooting out their own horns. Now why is it that seems to apply to many of the ones in the public eye at this moment?

These guys love putting “sic” in people’s quotes, but never really engage the argument itself (especially if it challenges their presuppositional framework).

It is really possible that a learned man such as Swanson doesn’t understand what “sic” actually means? This is what one grammar site had to say about the usage of “sic” – “you’ll find that when writers are quoting the work or words of other people, they’ll insert [sic] to indicate that the quote has been reproduced verbatim. Typically, the quote will contain an incorrect or strange spelling of some kind and the writer wants to preserve that without it appearing to be a typo on their part.”

You also see it when someone is using archaic language or is incorrect or their logic or point is inaccurate. I think that sums up much of Mr. Swanson’s assertions on his blog and radio show.Some of the things posted he’s said are so completely absurd that they read like an article from The Onion, almost a perfect parody.

3. Among the troll class, I also detect a serious lack of knowledge concerning or respect for history, especially church history.  This is not all that surprising, seeing as many bloggers express themselves as the first ones to discover truth in the history of the church/world.  Maybe they’ll be as successful as Jim Jones was with pulling together a nice little cult of 900+ in Guyana (back in the 1970s sometime).  Connection to church history in our thinking is critical, especially in a day of 100 million opinions and 50,000 cults.  I spend about half my extra-biblical reading time with the ancient church fathers.

That’s another untruth. Many people coming out of spiritual abuse and the corrosive churches that abound have a better handle on history and the role of religion and churches upon history. They are the ones that search, seek the answers without settling for what someone else has told them. Which is about as far as one can get from a ‘cult’ member or leader. Cult leaders cannot stand for others to not worship them or have more knowledge than they do and frequently accuse others of not having sufficient understanding of history and whatever ‘holy’ book used.

4. Too many of these folks love the world of lust and flesh and they hate their brothers (or don’t love them very much, anyway).  Technically, it’s supposed to be the other way around. The Bible wants us loving our brothers, hating the world of lust and flesh, and hating the lust and flesh stuff that corrupts the brother.  It’s the third part of this that’s the hardest to track down. And yes, you can get too picky with your brother.  Matthew 7:1-4 applies.  Maturity enables judgment. Immaturity disables moral judgment (2 Cor. 10:6).

That’s rather backwards. Most of the people coming out of cultist church situations have a passion for helping others not make the same mistakes as they, to see to their spiritual emotional healing, and it comes out of love for people. I haven’t noticed much love for anyone but themselves in many of the fundamentalist churches lately. Statistics show that more what you would call Apostates volunteer to care for others in some charitable way than those that identify as conservative Christians.

Church people in apostasy are usually gravitating towards the Hollywood gay-pride thing (ie. lust of flesh and pride of life), while at the same time they work very hard to create as much dissension between brothers in the church as they can.  They’ll separate chief friends if they can, hoping to the devil these friends won’t pick up the phone to call each other (and work it out). You can sniff these folks out pretty good, if your sniffer is calibrated/sanctified.  Most worldly types just love the lust-pride thing, and they could care less about Christians, unless the Christians are bugging them about their lust-pride thing.

Gravitating towards the Hollywood gay-pride thing? Wasn’t Swanson just going on about loving people and hating the sin? Who has the right to say their own sniffer is ‘sanctified’? Plus most church people don’t need the devil or anyone else stirring up dissension because many of them specialize in that very thing.

5. Finally, there just isn’t much fear of God before their eyes.  After reading the blog, try to imagine this person on his knees trembling before God, crying out for mercy, forgiving and being forgiven.   You don’t see much of that on the internet these days.

Can’t imagine Kevin Swanson on his knees trembling before God. I can see him trying to tell the Almighty exactly what He should do next.