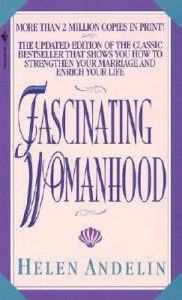 I’m going to be honest: I have no idea what to do with this chapter. None. So, for today’s post, I’m going to quote a some larger portions, in their entirety, add some of my concerns, and see what you all think of what she says.

In a Pandora’s Box reaction, instead of the man responding with love and tenderness, he becomes angry and pours out hostile feelings toward his wife. Why does he do this? Up to now he has been afraid to express his anger. In the face of his marriage problems he has felt he must suppress his anger to hold his marriage together. This it not to say that he acted wisely, but only to say that he did so out of what he felt was a necessity. A high-principled man who loves his children will make every effort to hold his marriage securely together.

When his wife applies Fascinating Womanhood over a period of time, he begins to feel secure in his marriage. He no longer feels he must hold his troubled feelings within and loses his fear that speaking out will cause marriage problems. Then one day, at last, he dares to open Pandora’s Box and release the resentful feelings he has kept hidden there.

If you should face this situation, allow him to empty Pandora’s Box. You should, in fact, encourage him to speak freely and completely. And you should not make the mistake of defending yourself, justifying yourself, or fighting back. You will have to sit there quietly, taking it all and even agreeing with him by saying “I know, I know, you are right.” But, when the last resentful feeling has been expressed and Pandora’s Box is empty, he will have a feeling of relief, and a love and tenderness for you not known before. And if has had a reserve, it will probably come tumbling down along with the Pandora’s Box . . .

She then goes on to relay stories from readers, two of which are horrifying and involve verbal abuse and extra-marital affairs that the wives in these situations “humbly accept” and “know that they deserve.” For the wife whose husband cheated on her, she woke up in the hospital after getting her tubes tied so her and her husband could have more sex (they’d been on NFP previously, and they were both Catholic)– only for his “mistress” to be in her recovery room the second she wakes up. And… she blames herself entirely. The fact that her husband didn’t even bother telling her that he was cheating before she had an invasive medical procedure performed just . . . Ack. And then it’s her fault. I can’t even.

But, back to her opening paragraphs: I can somewhat understand where she’s coming from with this. I’ve been in some relationships– friendships and otherwise, where I didn’t feel comfortable enough to ever be honest about my feelings. Our relationships just weren’t the kind where we could talk about things that were bothering us– and that was ok with me, I just didn’t put in a lot of effort to those relationships, and they either never deepened (which is fine, you don’t have to be “bosom friends” with every Tom, Dick and Harry on the planet), or the relationships died– which was also fine.

I imagine, in a marriage relationship, becoming comfortable enough to share your feelings could result in this “Pandora’s Box” situation she describes, but there seems to be several assumptions going on in the background:

For those of you who have been married a while, what do you think of this?

December 3, 2013 Quoting Quiverfull: A Ministry Head Cheating is a Predictable Cycle?
Recent Comments
6 Comments | Leave a Comment
"This is late, partly bc of my preoccupation and partly bc I'd been slowly reading ..."
Jennifer Serena’s Serenity – Luxury Hotel, Birthing ..."
"Thank you for your commitment to truth and love, Suzanne. Best wishes to you and ..."
Meredith Anne Not a Goodbye, More of a ..."
"For what it's worth, I've learned a lot from you about a Very Creepy movement ..."
Gwen Pryce Not a Goodbye, More of a ..."
"Unfortunately, this kind of satire (if it even is satire) is what gives Christianity the ..."
Emily Is Biblical Gender Roles a Big ..."
Browse Our Archives
get the latest from
Nonreligious
Sign up for our newsletter
POPULAR AT PATHEOS Nonreligious
1