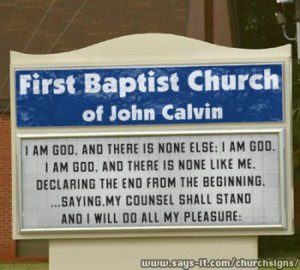 by Bruce Gerenscer cross posted from his blog The Way Forward

In this post I want to I want to focus on the last two points.

When it comes to God and his actions, what conclusions would an unbiased, uninitiated reader come to? Does the Old Testament reveal the God of love Christians are so fond of talking about? Or do we see a God who is capricious, vindictive, and egomaniacal? Do we see a God who punishes and kills those who dare slight him or worship him in the wrong way? Even in the New Testament, God is hardly the God of love Christians say he is. He brutalizes his own Son on the cross, not for his own sin, but the sins of others. What father in real life would do this?  This same God killed Ananias and Sapphira because they told a lie. And what about the book of Revelation, the written record of what God plans to do to all those who did not believe the right things and did not worship him? God is definitely an NC-17 movie.

There is no defense for the God of the Bible. He violates his own moral laws, and, at times, commands others to violates his laws. It is hard not to conclude that the Christian God is quite schizophrenic. One day he is the Shepherd gently caring for the sheep and the next day he is the wolf ripping the neck out of the sheep. Is this God really worthy of our love, devotion, and worship? I think not.

Christians often go to great lengths to defend their God. Calvinists are among the worst. Since they believe everything that happens is predestinated and that God, because he is sovereign, is free to do whatever he wants, they have no problem justifying their God’s murderous, psychopathic behavior.

Why was it right for God to slaughter women and children in the Old Testament? How can that ever be right?

It’s right for God to slaughter women and children anytime he pleases. God gives life and he takes life. Everybody who dies, dies because God wills that they die.

God is taking life every day. He will take 50,000 lives today. Life is in God’s hand. God decides when your last heartbeat will be, and whether it ends through cancer or a bullet wound. God governs.

So God is God! He rules and governs everything. And everything he does is just and right and good. God owes us nothing.

If I were to drop dead right now, or a suicide bomber downstairs were to blow this building up and I were blown into smithereens, God would have done me no wrong. He does no wrong to anybody when he takes their life, whether at 2 weeks or at age 92.

God is not beholden to us at all. He doesn’t owe us anything.

Now add to that the fact we’re all sinners and deserve to die and go to hell yesterday, and the reality that we’re even breathing today is sheer common grace from God.

I could make the question harder. As it was stated, it doesn’t feel hard to me, because God was stated as the actor.

My basic answer is that the Old and New Testaments present God as the one who has total rights over my life and over my death.

“The Lord gave, and the Lord has taken away; blessed be the name of the Lord” (Job 1:21). How he takes away is his call. He never wrongs anybody.

How would you state it to make the question harder?

The part that makes it harder is that he commands people to do it. He commanded Joshua to slaughter people, okay? You’ve got human beings killing humans, and therefore a moral question of what is right to do.

The Bible says, “Thou shalt not murder,” yet God says to Joshua, “Go in and clean house, and don’t leave anything breathing! Don’t leave a donkey, child, woman, old man or old woman breathing. Wipe out Jericho.”

My answer to that is that there is a point in history, a season in history, where God is the immediate king of a people, Israel, different than the way he is the king over the church, which is from all the peoples of Israel and does not have a political, ethnic dimension to it.

With Joshua there was a political, ethnic dimension, God was immediate king, and he uses this people as his instrument to accomplish his judgment in the world at that time. And God, it says, let the sins of the Amorites accumulate for 400 years so that they would be full (Genesis 15:16), and then sends his own people in as instruments of judgment.

So I would vindicate Joshua by saying that in that setting, with that relationship between God and his people, it was right for Joshua to do what God told him to do, which was to annihilate the people.

But that’s much more complex morally than saying that God does it. He can cause a flood and kill everybody on the planet except 8 people and not do a single one of them any wrong. But he didn’t ask anybody else to do that. It gets difficult when he uses others.

An example of this right now is that God has given the sword to the government (Romans 13:4). Therefore I believe the government has a right to take a rapist and a murderer and to put him in jail. Or to kill him.

So God has his times and seasons for when he shares his authority to take and give life. And the church today is not Israel, and we are not a political entity. Therefore the word we have from the Lord today is, “Love your enemy. Pray for those who abuse you. Lay your life down for the world. Don’t kill in order to spread the gospel, but die to spread it.”

I wrote a post yesterday about the “God  owes us nothing” argument. Piper uses this argument to justify his God’s immorality and indecency. God doesn’t owe humans anything in this life, so if he maims, rapes, sodomizes, starves, brutalizes, or kills a person, either by direct action or using humans to do it, he is quite justified in doing so. He is, after all, GOD.

I hope what John Piper is saying sinks in to Christians who read this blog. Is this your God?  In this life, would you want to be married to, or be friends with, someone who acted like the Christian God?  Of course not. We would have such a man arrested and imprisoned. We might even have him executed. Yet, because God is GOD, he is gets a free pass.

I give John Piper credit for one thing. He doesn’t shy away from what the Bible says and the implications of what it says.  None of this God is love and has a wonderful plan for your life thinking. Piper’s God is only interested in loving and caring for his covenant people, and even some of them, like the Israelites in the wilderness, face what I call BAD God. (like Bad Santa, Bad Teacher, Bad Grandpa, and Seven Psychopaths all rolled into one)  To come away with the belief that God is love and only wants what is best for us requires jettisoning most of the Bible. I understand WHY people want to believe in the loving God who only wants what best for them, but, as long as the Bible is the foundation of Christianity, Christians are going to have to defend the  murderous, violent, capricious acts of their God.

This is why many atheists say…even IF there was a God…I would not worship the Christian God. Why would I worship such an immoral deity? The God of the Bible is a God that should be rejected by everyone, including Christians. Perhaps it is time for Christians to write a new Bible?

December 1, 2013 Quoting Quiverfull: Cultural Comformity and Compromise?
Recent Comments
28 Comments | Leave a Comment
Browse Our Archives
get the latest from
Nonreligious
Sign up for our newsletter
POPULAR AT PATHEOS Nonreligious
1