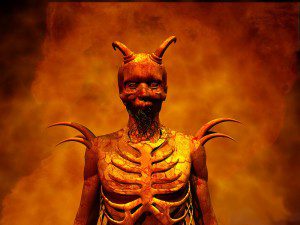 The pastor begins Bible study with a short prayer and immediately dives into his notes. I can sense the eagerness in his voice. The Lord is really going to speak to us through this message, he says. “When I started writing out what I wanted to say, it was like the Spirit just downloaded the information into my brain. I was the one holding the pen, but God was the one writing.”

The five or six people gathered around him in the living room listen attentively. One woman takes notes while another sets her phone to record the message.

“What Paul is saying here,” he says, “is that there are evil dogs, deceitful workers, who live for the pleasures of this world, the pleasures of their soul. They may call themselves Christians, but they preach a false gospel of tolerance and acceptance of fleshly entertainments, denying the very God who made them. And the Lord will say to them on that day’”—and he lowers his voice to a rumble—“‘I never knew you.’”

For the next two hours, as he rocks back and forth, he explains to us the dangers of art, creativity, imagination, and higher education. We’re not to love the world, he says, because Jesus did not love the world. There are a lot of Catholic heresies creeping into the Church that encourage believers to encounter God through physical things like art and fiction; but the man who invented art, according to the Scriptures, was descended from Cain the murderer of Abel.

My stomach feels knotted and tense, as though a boa constrictor is wrapping itself around my insides. I wonder if I should go hide in the bathroom until the message is over. Because whatever this is, it isn’t Jesus.

“The devil has a whole system of theology and philosophy,” wrote Thomas Merton, “which will explain, to anyone who will listen, that created things are evil, that men are evil, that God created evil and that He directly wills that men should suffer.”

The Bible depicts Satan as a master manipulator of religious feeling. He disguises himself as an angel (2 Cor. 11:14). He offers us secret knowledge known only to God (Gen. 3:5). He tempts Jesus in the wilderness by quoting the “plain meaning of Scripture”; Jesus defeats him by appealing to the spirit behind the letters (Matt. 4:5-7).

The devil wears many disguises; but few have been more effective than that of the holiness preacher. The following are seven key tenets of demonic theology.

According to Satan, God delights in punishing you even as a Christian for your wicked behavior. In fact, He directly intervenes in the natural order to increase your burden of misery. Cold weather, dogs barking, screaming children are all God’s way of saying that He hates you and wishes you would shape up and quit being such an embarrassment.

The devil’s theology of the cross goes like this: God is angry with humans; and the only way His anger can be satisfied is through a blood sacrifice. And because we’re not good enough on our own to appease Him, He sent His Son to earth and killed Him in our place. Now God wants to hurt us, but He can’t because of Jesus.

I sometimes wonder if this is why statistically there’s SO much child abuse in fundamentalist churches. At the heart of existence is a cosmic struggle between father and son. Father killed son to assuage his own anger. God is an angry, old man who would kill you if He was able. If that’s not a recipe for dysfunction (and misogyny), I don’t know what is.

3. Christians will rejoice in the suffering & slaughter of everyone else

A reporter tells the story of meeting an Egyptian Muslim who described to him in loving detail the eternal fate awaiting everyone who doesn’t belong to his particular brand of fundamentalist Islam: we’ll grow layer upon layer of thin, tender skin, each more sensitive than the last. Then God will burn off each layer one by one, and when He finishes, He’ll give us a new set of skin and the process will start over.

Sadly the delight of this cleric when imagining the cries of the damned is shared by many Christians. They smack their lips at the prospect of seeing Jesus mow down the wicked at His coming. There’s a notorious email that allegedly tells the true story of three children who visited hell and saw the pope begging Jesus for a drop of water to cool his parched tongue. Jesus just looks at him and bursts into maniacal laughter.

It can’t be said enough: we become what we worship.

4. People are inherently and totally evil

There’s no good in humanity because people are incapable of goodness. We’re all infinitely and indistinguishably loathsome in the sight of a holy God, lacking even the smallest capacity for beauty or heroism or courage or generosity or self-sacrificing love.

For a lot of people this notion of depravity is deeply appealing. For them a thing isn’t true, even if it’s in the Bible, unless it sounds angry and hateful. When they say, “That’s not biblical!” what they mean is, “That doesn’t sound like the cruel god I worship.”

5. Satan is the author of pleasure

“The moral theology of the devil,” says Merton, “starts out with the principle: ‘Pleasure is sin.’” Those who feel unappreciated sometimes channel their resentment into a hatred of other people, with their bodies and their games and their music and their love-making, savoring the day when all physical pleasures are consumed in the fires of God’s holiness. My relationship with the old pastor eventually ended after a nasty and protracted argument in which he accused me of enjoying things too much.

6. The mark of a true Christian is to always be right

How can you tell if a person is truly saved? Not by their love, but by their ability to win an argument. The goal of the Christian life is to punish and eliminate those who contest your theology, proving your own superiority by proving them wrong.

7. The central figure in creation is… the devil

In demonic ideology the devil occupies a central authority. The victory that Jesus won over the infernal powers at the crucifixion (Col. 2:15) is all but forgotten. Satan owns a majority of the media centers, governments, banks, public schools, and churches, and the world is only going to slide further and further into the darkness of perversion and satanic deception in the years leading up to the coming of the Antichrist. There’s nothing we can do to resist the advance of his kingdom, for he is all-powerful.

To the demon-haunted mind, the devil is basically god.

It can be so easy to mistake any or all of the above for true religion if this is what you’ve grown up being told all your life. So I’m just going to speak the truth really simply and clearly:

– No, you’re not a screw-up. You’re loved by a God who is wonderful and gentle and kind

– The cross is the mercy of God; the cross is God being scared and humiliated and abandoned and terrified and hated and betrayed and disillusioned. Drinking to the dregs the cup of human suffering, for us. That is what makes Him a King, and He is already reigning. The powers of darkness have been conquered by faith, hope, and love.

– You were made for pleasure by a God who delights in pleasure. This visible world is resplendent with the light of His beauty and goodness. All created things praise and reflect Him. It’s good to dance, good to laugh, good to play games, good to drink wine, good to love.

We’ve been trained to look for evil in all the wrong places: liberals promoting tolerance, politicians promising peace. But the devil doesn’t always come in the most obvious disguises. He knows he can corrupt us more subtly than that, by telling us we just need to be more sold out, more on fire, and maybe then God would love us. The devil wins some of his most devoted followers by preaching against sin.

December 5, 2013 Quoting Quiverfull: How to Attract a Righteous Guy's Attention?
Recent Comments
51 Comments | Leave a Comment
"This is late, partly bc of my preoccupation and partly bc I'd been slowly reading ..."
Jennifer Serena’s Serenity – Luxury Hotel, Birthing ..."
"Thank you for your commitment to truth and love, Suzanne. Best wishes to you and ..."
Meredith Anne Not a Goodbye, More of a ..."
"For what it's worth, I've learned a lot from you about a Very Creepy movement ..."
Gwen Pryce Not a Goodbye, More of a ..."
"Unfortunately, this kind of satire (if it even is satire) is what gives Christianity the ..."
Emily Is Biblical Gender Roles a Big ..."
Browse Our Archives
get the latest from
Nonreligious
Sign up for our newsletter
POPULAR AT PATHEOS Nonreligious
1