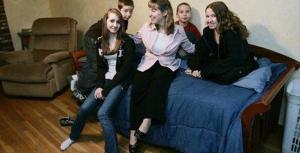 by Samantha Fields cross posted from her blog Defeating the Dragons

So, Robert Knight, an extremely conservative writer for Townhall and whose articles occasionally appear in publications like the Washington Times, wrote an article last Tuesday called “Homeschooled Girls vs. Feminists.” Since the article spends most of its time talking about grown women, I have to admit to some mild annoyance to the persistent infantilization of women in conservative circles. College-aged females are women, thank you.

My real problem with his article, however, is the false dichotomy he frames in the title and then argues in the piece itself. Just a quick review: a false dichotomy, also known as the false dilemma, is an attempt to reduce a complex, nuanced argument down to two separate, extreme positions. This type of argument is probably more familiar to people as “black and white thinking.” Knight’s article is an excellent example of how fundamentalists approach almost any issue– it’s us against them. Good, godly, homeschooled “girls” (grr) verses those big, bad, bra-burning, man-hating feminists.

First of all, I’m a homeschooled graduate and a feminist. My existence flies in the face of Knight’s argument. Also, there has not been any backlash against homeschooling led by feminists. If a feminist figure says anything at all, it’s to comment on the sexist attitude in religious homeschooling culture. Also, the feminist who said that, Laura Collins Lyster-Mensh, homeschooled her children and published that article in Home Education Magazine. The only people who really seem to be saying that feminists oppose homeschooling are homeschoolers. In fact, there are many feminists who choose to homeschool– women like Sara Schmidt. And Suki Wessling.

But it’s not an uncommon reaction for homeschooling advocates to point at people like me who want to see common-sense policies introduced and start shouting “you’re all a bunch of feminists!” See Robert Knight, and “Overhere” (who was commenting on a secular homeschooling forum). In these sorts of discussions, feminists get painted inaccurately, and motivations are attributed to us that fall right in line with the anti-feminist rhetoric that’s existed for decades. We’re just selfish. We think homeschooling means signing ourselves into a “concentration camp” (which, granted, that comparison comes from The Feminine Mystique…).

Which is, le sigh, not true.

But, I’d like to address how Knight sets up this dichotomy in his article. He’s responding to an article I can’t read, “Feminism’s Worst Nightmare: Educated Women,” by Lou Markos for The City (published by Houston Baptist University), but giving the somewhat paranoid nature of most of his writing, I’m going to assume that this essay is pretty typical fare, and probably falls inside CBMW and CWA -type arguments, which Knight seems to share.

They possess a razor-sharp wit with which they can cut pretentious people (especially males) down to size, but they rarely use this skill, and only when they are sorely provoked …

They have a firm knowledge of the Bible, but they (unlike my biblically-literate male students) don’t engage in forensic debates over minor theological points of controversy; they will, however, step in if the boys get too contentious or triumphalist …

Home-schooled girls have wonderfully synthetic and creative minds that make connections across disciplines … they are gifted in the arts; almost all of them can sing and most play instruments and draw. …

They have not bought in to the lies of our modern consumerist state: that is to say, they do not judge their value and worth on the basis of power, wealth, or job status.

There are some pretty specific attitudes that Markos (and now Knight) are praising.

Knight follows this up with talking about how Jane Austen and Downton Abbey are so popular– which he attributes to these works as not catering to “politically correct feminist lenses.” All that claim does is demonstrate a rather astonishing lack of historical awareness of either the Regency Era or WWI-era Britain. Trying to appropriate Jane Austen as some sort of anti-feminist figure is ridiculous. I’m not overly familiar with Downton Abbey, but many of my friends love it for explicitly feminist reasons.

And, apparently, feminists are engaged in the “real war on women” because we have some sort of campaign to encourage promiscuity and convince women not to ever, ever get married. Which is a pretty typical conservative phrasing of feminist arguments– they take the sex-positive, anti-shame, you-can-get-married-when-you-want-to-who-you-want narratives of feminism and completely flip them upside down.

Feminists also supposedly scream a lot about how there’s no differences between men and women and about how much we hate femininity and feminine women:

They have the wit and discernment to perceive that the feminist is finally a greater threat than the male chauvinist: for whereas the chauvinist demeans femininity, the feminist dismisses it altogether as a social construct that has no essential grounding in our God-created soul. It’s no wonder feminists hate the feminine Sarah Palin with white-hot intensity.

I would like to actually address this issue, because it’s something that as a feminist I bump into a lot, and I think it’s the essential disagreement between egalitarians and complementarians. Feminists and egalitarians both assert that while biological factors exist (besides the obvious reproductive differences, there’s also different skeletal and muscular structures), that substantial and essential differences don’t. Men and women are both created with the imago dei, both receive spiritual gifts, and both can serve in equal roles. Egalitarians recognize the variety and complexity of all people, and are uncomfortable with dividing that variety according to patriarchal stereotypes.

So yes, feminists actually believe that “femininity” is a social construct that has little grounding in biological sex–  men, women, and trans* persons can have traits and attitudes reflective of socially constructed “feminine” and “masculine” traits. Knight isn’t wrong here.

However, what Knight believes is that there is absolutely a fundamental difference between men and women– and it’s doubtful if he recognizes the legitimacy of trans* persons (which would be an attitude he shared with some). He believes that this difference is a part of our “God-created soul” and arguing any differently is akin to arguing against God and his Holy, Inspired, Infallible, Inerrant Word (instead of just a traditional interpretation of it).

It’s interesting to note that Knight spends so much of his article recognizing women he describes in terms of Proverbs 31– as “strong” and, at many points, very capable and intelligent. I think it’s possible that if Knight could engage with feminism, he’d realize that the feminism he’s portrayed here is nothing more than a straw man. I think the views he’s expressed here are sexist, but they come from this conservative preaching-at-the-choir that’s happened for decades now. Organizations like CBMW and CWA have spent a long time telling Christians what feminism is and what feminists do, and it’s gotten to the point that many Christians accept these portrayals without analysis or research.

Feminists want a world where gender privilege no longer exists, where people are treated the same regardless of their sex or gender identity, where women and trans* persons are no longer oppressed by violent systems. That’s it, really.