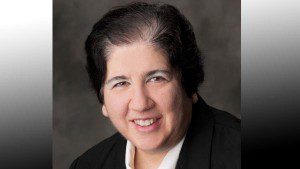 Suzanne Atanus, Republican candidate for U.S. House of Representatives in Illinois, claims autism and dementia are God’s punishment for abortion and LGBT rights.

Atanus claims that God is “angry” with the United States and has sent scourges like autism and dementia to punish the American people, according to a report published Jan. 22 by the Chicago Daily Herald.

Atanus is seeking the Republican nomination for the 9th Congressional District in Illinois. Her opponent for the GOP nomination is David Earl Williams III, a first time candidate and U.S. Navy veteran, who says he voted for Barack Obama in 2008 but has since changed his political leanings.

The winner of the GOP primary will face Rep. Jan Schakowsky in the fall.

“I am a conservative Republican and I believe in God first,” Atanus said at an endorsement session with the Daily Herald. She said she believes God controls the weather and has put tornadoes and diseases such as autism and dementia on earth as punishment for gay rights and legalized abortions.

“God is angry. We are provoking him with abortions and same-sex marriage and civil unions,” she said. “Same-sex activity is going to increase AIDS. If it’s in our military it will weaken our military. We need to respect God.”

Williams, her opponent for the GOP nomination, responded that AIDS is spread by unsafe sexual practices in all people, not just homosexuals, and said that as a veteran he was offended by her comments.

Atanus, 55, has run for this office twice before — she lost the 2010 GOP primary and in 2012 was taken off the ballot because she didn’t have enough valid signatures.

January 23, 2014
International House of Prayer: One Year Later After the Death of Bethany Deaton
Next Post

January 24, 2014 Motley Crue and Christian Fundamentalists would get on great
Recent Comments
11 Comments | Leave a Comment
Browse Our Archives
get the latest from
No Longer Quivering
Sign up for our newsletter
POPULAR AT PATHEOS Nonreligious
1