Quoting Quiverfull: Protecting Daughters Most of All?

Quoting Quiverfull: Protecting Daughters Most of All? January 31, 2014 Suzanne Titkemeyer 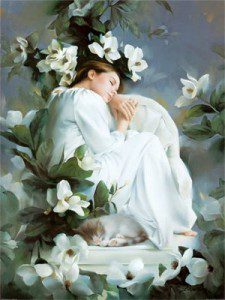 by Jonathan Lindvall from the Yahoo Bold Christian Living Group

Several generations ago, a father’s responsibility (and right) to
protect his wife and daughters was generally assumed and acknowledged in
our legal system. It would have been unthinkable for a woman to be
compelled to participate in legal proceedings, without her father’s (or
in the case of a married woman, husband’s) involvement. I understand in
many situations women could not even be directly arrested, until
permission of their father or husband was acquired. True, a husband or
father then became liable for his wife’s/daughter’s actions. But the
principle of Numbers 30 (male protection over women) was honored.

Today, because of our radical embrace of individualism (which leads to
feminism), our culture has undercut our ability to protect family
members. In my estimation, Christian families who see this, need to
rethink our participation in many of society’s typical structures in
order to maintain (and reclaim) scriptural family corporate identity.

I shudder to think of my 19-year-old daughter being called for jury duty
(much more, drafted into the military). How can I protect her from this
virtual inevitability, if she becomes visible to the system?

The attorneys at the Home School Legal Defense Association have
repeatedly warned that homeschooling is the best way to buffer your
family from bogus “child abuse” or “child neglect” charges. The more
visibility your children have in the system, the more vulnerable your
family is to inappropriate intrusion.

Our sons are required by law to “register” for a currently non-existent
draft at age 18. The government’s reason for this compulsory
“registration” is that too many citizens “fall through the cracks” due
to lack of visibility. Thankfully, our daughters do not yet have to
become more visible/vulnerable than we choose to voluntarily make them.

I obviously share your conclusion that young women serving on a jury is
a very vulnerable, potentially damaging experience we should be able to
shield them from. Let me share some thoughts of how we can protect our
daughters from this particular emotional/mental threat.

You noted that “never allowing her to become a registered voter” is
something you have learned the hard way. This is definitely one of the
ways we express our “individuality” in our culture. Early in the
republic’s history, only heads of households voted. Sadly, today even in
very conservative households most of us have embraced the philosophic
underpinnings of the women’s suffrage movement. Of course women should
vote! Therefore even Christian couples occasionally “split” their vote,
canceling one another’s vote.

But since women are allowed to vote in our society, doesn’t this mean
Christians must compromise with the cultural mores and have our wives
vote, so we can double our impact? This assumes that God NEEDS our help
in appointing His choice of leaders (Romans 13:1 makes it clear that all
“authorities that exist are appointed by God”). Especially if
registering to vote creates greater vulnerability for our families,
perhaps we should rethink this question.

But even if you don’t register to vote, at least some states are now
drawing jurors from their list of driver’s licenses. Ultimately, there
may be no way to completely shield our families from government
intrusion. However, this is one more reason I have chosen not to have my
daughter get a driver’s license.

I believe Numbers 30 indicates that daughters are to be more protected
than sons. When Bethany approached the age when many young people
acquire permits to learn to drive, I began hinting that she would soon
be driving. She wasn’t particularly excited, but was prepared to follow
my leadership. My wife appealed to me, however. She questioned whether
it is truly healthy for young ladies to drive. She noted that when she
“got wheels” she began displaying much more of an independent spirit
from her parents. She questioned whether this was healthy.

While I was initially skeptical, I began pondering and praying about
this issue. I recalled an aunt who never has driven in her life.
Although she is quite capable, no doubt, she and my uncle apparently
believe it is his place to drive and hers to ride. This is the
traditional pattern from before cars were even invented. Even today, in
most families the husband does the majority of the driving when the
family travels together.

At about this time, the Lord was clarifying my own thinking regarding
young people’s independence and our assumptions regarding individualism.
Ultimately I evaluated this decision in light of a more scriptural
paradigm, and concluded that we would at least delay Bethany’s getting a
driver’s license. We anticipate leaving this decision to her husband,
whoever (and whenever) the Lord has her for.

This flies in the face of most contemporary notions. When Bethany flies
with me, she doesn’t have a “government issued” picture ID. We must
bring her birth certificate for her to be allowed on the plane.

It would certainly be more convenient to have another driver (and we are
delighted to have our 16-year-old son helping with the driving, now) but
I am committed to protecting my children, but especially my daughter,
from unnecessary vulnerabilities the world’s ways impose.

I’m thankful my daughter will not likely be called for any jury duty.
It’s possible Bethany could still be visible and identified in some
government computer (she has a birth certificate) but I am doing my best
to help her “fall between the cracks” of the world’s systems for as long
as we can keep it that way.

February 1, 2014 Quoting Quiverfull: Addicted To Peer Interaction?
Recent Comments
81 Comments | Leave a Comment
Browse Our Archives
get the latest from
No Longer Quivering
Sign up for our newsletter
POPULAR AT PATHEOS Nonreligious
1