Ryan Bell and the Pursuit of Knowledge

Ryan Bell and the Pursuit of Knowledge January 6, 2014 Suzanne Titkemeyer 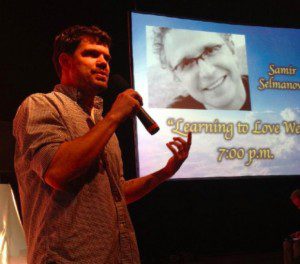 by Anais Chartschenko cross posted from her blog Whisper Collector

(Editorial Note: Here are a few links you have not heard of Ryan Bell and his column/project at The Huffington Post  He was the pastor of Hollywood Adventist Church and now he’s in trouble with the Seventh Day Adventist officials)

I think the pursuit of knowledge is always beneficial. It doesn’t matter how you came to the decision that it is time to reflect and read about view points different from your own. So what that Ryan Bell is writing a book to document his process? I wish I could go back in time and tell myself to do the same thing.

How can I capture the emotion I felt at reading Carl Sagan’s eloquent explanation of the solar system some 14 years later? The feeling when I finally read a book by Richard Dawkins, who gave me science- that world that had been previously denied as the devil’s territory? My heart raced, I sweated, and I felt faint. I felt a weight lift from me. I was not the most important of creatures, one of god’s chosen in the remnant church. I was not about to be tortured, because it was not the end times as taught by the prophet.

I no longer was cursed by the sins of my ancestors. I was free of the sin that was put on me as the result of rape. I could listen to secular music, and revel in the beauty of opera; I could dance!

I am on one teeny tiny planet, with an atmosphere, and a moon that reflects light. I am an amazingly unlikely outcome of genetics. The world is full of these beautiful moments that I can appreciate because they are not tainted by sin. They are the remarkable outcome of thousands of years of evolution. When I stopped believing in the literal word of the Bible, and the Prophet, my depression became less marked.

I came from the religion that Ryan Bell came from. By his choice to live as an atheist even for one year, he is losing everything he built. I’m not sure that most people who are criticizing him understand what that means. He lost his career. The community he loved has disowned him. Unless his family is on the very liberal side, they may disown him too.

Seventh Day Adventism is very insular. They believe they are the remnant church, and everything outside of them is worldly. They do their best to avoid anything worldly. You can go your whole life without having to deal with anyone outside the church. They have their own churches, schools, and hospitals. They have their own television network, as well as publishing company because you are discouraged from reading anything that is not the bible or Adventist produced.  In one of the towns I lived in, everything closed on Friday night in observation of the Sabbath.

I found out about Ryan Bell because I have a few of my old Adventist friends on facebook. They were talking about him. One of them claimed she could tell he wasn’t a good leader, and questioned his spirituality. If you are not all the way in, as demonstrated with Ryan Bell, you are out. You can not change the church from within for very long. It does not want to be changed. His big sins? He championed LGBTQ and women’s rights.

I am glad he has decided to use his platform to talk about his experiences learning. He has come from a place where even thinking about questioning the status quo is sinful. I think he should be cut some slack. Who knows how he will feel in a year? Maybe he will be a Christian, and maybe he won’t. The point is, he will have been able to ask himself what he believes.

Read everything by Anais Chartschenko!

I am Anais. I was raised in a fundamentalist community. I try to understand what high school is like through YA fiction. I write while drinking tea. I have a story published in the Love Magick Anthology, edited by Francesca Lia Block. Currently, I am working on a book. My blog is Whisper Collector

January 7, 2014 Quoting Quiverfull: No SUVs on Jupiter?
Recent Comments
7 Comments | Leave a Comment
"This is late, partly bc of my preoccupation and partly bc I'd been slowly reading ..."
Jennifer Serena’s Serenity – Luxury Hotel, Birthing ..."
"Thank you for your commitment to truth and love, Suzanne. Best wishes to you and ..."
Meredith Anne Not a Goodbye, More of a ..."
"For what it's worth, I've learned a lot from you about a Very Creepy movement ..."
Gwen Pryce Not a Goodbye, More of a ..."
"Unfortunately, this kind of satire (if it even is satire) is what gives Christianity the ..."
Emily Is Biblical Gender Roles a Big ..."
Browse Our Archives
get the latest from
Nonreligious
Sign up for our newsletter
POPULAR AT PATHEOS Nonreligious
1