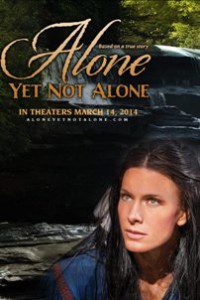 There’s a little story we at NLQ have been following for more than a few days. The sudden mysterious appearance of the title song “Alone Yet Not Alone” on the list of Oscar-nominated tunes for last year.

You haven’t heart of it either? It’s from a little-known Christian film called, you got it, “Alone Yet Not Alone” Didn’t come to your local mega-movie plex? Ours either. The first mention NLQ noticed of the film was a quick mention of it at a few sites like American Family Association and, perhaps it was, umm, Kevin Swanson or one of the other extreme fundamentalist/evangelical sites? It hasn’t even been in wide release yet. It’s scheduled to hit theaters in Spring 2014.

Evangelicals love their films, don’t they. Fireproof, Courageous, Facing The Giants and Soul Surfer just to name a few. Some of those films aren’t half-bad, some are downright corny and poorly acted. These also have some name-value in the general public, unlike “Alone Yet Not Alone”

When the announcement was made main stream media was as puzzled as everyone else and they wrote about it, speculating exactly why this song was nominated over other better known films with powerful soundtracks, like “12 Years A Slave” Evangelical Christians flooded the comments with such gems speaking of the love of Christ like these /sarcasm. These are just a few of the many out there on different sites.

“Aw, you poor, poor anti-Christian bigots *plays a tiny violin* A positive, affirming movie that gets endorsed by evangelical Christians gets an Oscar nod. Oh, the horror! You can’t stand for that one bit, can you? It hurts your poor, widdle feewings” IMDB – jinxmchue

“Well well, remember the awards show a couple of years ago when Taylor Swift won and Kanye West jumped out on stage and talked over her acceptance speech, spouting that Beyonce should have won? And then he grudgingly apologized, and she accepted it. But does that ring a bell again NOW? This time it’s JayZ and Taylor Swift (who obviously has forgotten what happened to her). So yeah, since somene had the nerve to praise God in song, rather than the vulgar words of rap or country/pop of Taylor Swift, the song of praise has no place in Hollywood, so it’s attacked. And then, she’s disabled, making her even more of a spectacle in their holier-than-thou eyes. To no avail by the gays, who would rather this young lady disappeared rather than accept the truth about themselves. God, what a country we’ve become. I wish this young lady luck. And I wish that someone of ‘celebrity’ would stand up for her right to be heard, in what used to be the old America. Remember though, once again it’s CA, where that atheist/racist put a replica of the thug Trayvon Martin in the manger of the Nativity at Christmas. That pretty much sums it all up about CA.” WND – Catlu

“This is how the leftist commicrats take the heat off themselves for their otherwise, clear cut and well documented and defined, hatred of God, His people, and any thing or any one else that declares His wonderfulness.
They do it in every sector of policy influencing entities, from science to education, they throw a tiny tidbit to the Apathetic Christians whilst they attack viciously from every other corner, and the apathy, happily, marches on.
They know they can’t just “throw God and faith out” in one lump sum of a deed. He has to be meticulously fragmented, occasionally but ineffectually endorsed, so in the end they can say, “we didn’t do this, see how we tried.” WND – Invalidnametwo

“The greatest weakness of Christianity is its pacifism. If Christians were more vocal than the atheists and barbarians, there would be more movies and songs with messages like these and Islam would not be the world’s largest religion. If they had stood there with axes and knives and cut the arresting soldiers and police when the mass arrests began in the USSR and Germany, think of how different history would be. Instead, they let the very vocal rude, and violent minority run right over them and their neighbors. Get angry like Jesus did at the money changers at the temple otherwise Christians are as guilty as the people who hate this song.” WND – PK

The comments on many articles go on and on and on in the same vein of hatred, gloating, blaming others for the problems in our culture and country at the press daring to say that a never-heard song from an obscure film being nominated was fishy.

Today we found out why and how it was nominated when the Academy Awards organization revealed they had disqualified “Alone Yet Not Alone” for Best Song. From Entertainment Weekly

Now it’s out of the race completely as the Academy of Motion Picture Arts and Sciences rules that its composer, a former governor of the music branch and current member of its executive committee, took advantage of his leadership position to improperly lobby fellow members of the branch.

In an interview with Entertainment Weekly’s Clark Collis after the nominations, Bruce Broughton acknowledged that he urged the members of his branch to consider the song, but insisted he had done nothing wrong.

“What happens is that the music branch of the Academy puts all the songs on a disc and I was concerned that this song would be really easy to overlook. So, yeah, I wrote some people and said, ‘Could you just take a look.’ That was literally the extent of the campaigning. I received in the mail songs from other films that were pressed and recorded CDs. We didn’t do anything like that at all.”

In a statement announcing the decision, the Academy said the nomination was pulled because Broughton had emailed members of the branch to make them aware of his submission during the nominations voting period. That would seem to be an innocuous action — studios and publicists are in a constant state of trying to get Academy members to consider their projects.

The violation came because of Broughton’s status as an officer in the organization.

“No matter how well-intentioned the communication, using one’s position as a former governor and current executive committee member to personally promote one’s own Oscar submission creates the appearance of an unfair advantage,” said Cheryl Boone Isaacs, president of the Academy.

The Governors Board called it an ethical breach, and although the violation isn’t specified in any of its rules, the group said rescinding the nomination was justified by this section of the Academy’s guidelines: “It is the Academy’s goal to ensure that the Awards competition is conducted in a fair and ethical manner. If any campaign activity is determined by the Board of Governors to work in opposition to that goal, whether or not anticipated by these regulations, the Board of Governors may take any corrective actions or assess any penalties that in its discretion it deems necessary to protect the reputation and integrity of the awards process.”

You know in the non-Evangelical world doing something like that would be considered trying to take an unfair advantage or even influence peddling or cheating.

Here’s the thing, if you really wanted to demonstrate to the a jeering unbelieving world that Christianity is the right way you wouldn’t be busy dishonoring the God you claim to love with these shenanigans. If you’re going to pretend to something at least try to get a few things Jesus said right.