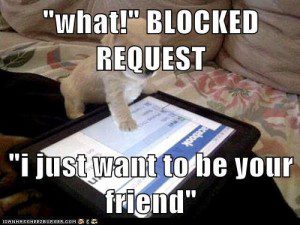 TW: @John Arthur & Erin, Hi. I also have a Pentecostal background (A/G to be exact), and was a youth pastor & worship pastor (not at the same time, youth for 13 years, worship for 10 years). I would very much love to talk to both of you and share experiences. I left the A/G at the end of 2011 (out 2 years now), and while I am still a believer, I completely denounced all of the BS nonsense that the A/G promotes, like speaking in tongues, faith healing, etc.

If you are both amenable to chatting further, Bruce (if he doesn’t mind doing this), can forward my email address to you both and you can contact me, just let him know. And Erin, I know exactly what you mean when you say you can still “speak in tongues on demand”, haha!

Erin: TW: I appreciate the offer, and respect that you’ve left the AG, but because you are still a believer, I would want to know a little more what you’d like to “chat” about.

As a former-christian-now-atheist, I’ve run into these “chats” a few times before that really only have one ulterior motive. I’m not assuming this is true of you, but I’d like to know more what you’re thinking first. Thanks!

John Arthur: I am glad that you have managed to escape the Pentecostal movement.

You say that you are still ‘a believer’. Does this mean that you are a Fundamentalist or an Evangelical or have you moved to some form of non-Evangelical Christianity? If the latter, I am open to the idea of chatting with you further about the Pentecostal/Charismatic movements.

I have informed Bruce that he can pass me email address onto you and you can contact me. Even if you are some kind of open evangelical, I am willing to discuss the ‘tongues movement’ with you further.

What I am not open to is any subtle or direct attempt to try and reconvert me to Fundamentalism/Evangelicalism. If you do try to attempt this, I will close off further discussion. I consider both Fundamentalism and most of Evangelicalism to be religions of psychological, emotional and intellectual oppression and don’t wish to be sucked back into those camps, ever again.

So, if you are willing to stick to topics related to the Pentecostal/Charismatic movements and their problems, i am open to further discussion with you.

Why are Erin and John Arthur so hesitant to correspond with TW? The answer is this; they have had many of these kind of conversations already, and rarely, if ever, do they turn out well.  Now let me explain why they don’t turn out well.

Evangelical Christians believe that the Bible is the inspired, inerrant, authoritative Word of God. They believe a person must have a personal relationship with Jesus Christ in order to go to heaven when they die. Anyone who does not have a personal relationship with Jesus will go to hell when they die. Evangelicals believe the Bible/God/Jesus has commanded them to go into all the world and preach the gospel to every creature whether they want to hear it or not. They believe all other Gods are false Gods and all other religions are false religions. In their mind, Jesus is THE WAY, not a way, THE TRUTH, not a truth, and THE LIFE, not a life. Simply put, it is Jesus or hell, choose!

People like Erin, John Arthur, and myself know that Evangelicals have a pathological need to evangelize. While they may say they just want to be friends or get to know us better, what they really want to do is win the non-Christian, ex-Christian to Jesus. How could it be otherwise? If Evangelicals really believe the Bible is what they say it is, Jesus really is the only way, truth, and life, and hell awaits those who refuse to accept Jesus as their Lord and Savior, how can they not attempt to evangelize everyone they come in contact with?  In fact, I would say if they DON’T evangelize they are being disobedient to the clear teachings of the Bible. (as read through the eyes of an Evangelical)

One man, a preacher and the brother-in-law of a dear friend of mine, friended me on Facebook a few years ago. While he was quite disturbed by my deconversion, he told me he just wanted to be my friend. When his sister-in-law found out about it, she warned him to NOT try to evangelize me or be preachy.  Our friendship didn’t last two weeks. I wrote something that infuriated him, he double-barrel blasted me, told me I was a bad influence on people, and unfriended me. He later told his sister-in-law and brother-in-law that they should avoid me and not be friends with me because I was a tool of Satan and a bad influence. Fortunately, they ignored his advice and they remain my friends. (They are my only Christian friends)

Another man, a local Evangelical preacher, tried a few years ago to befriend me. He and I corresponded a bit and he would comment from time to time on this blog. (in one of its previous iterations) He friended me on Facebook and we began having more serious discussions in private. But, like all such friendships, it quickly came to an end when he began having doubts about his call to the ministry and even his faith. My discussions with him were quite unsettling to him, so instead of honestly dealing with the questions and doubts I raised, he determined I was the problem and unfriended me, stopped answering my emails, and stopped commenting on this blog.

Who can forget Evangelical Baptist preacher Marty? Marty was a regular reader of this blog and commented quite frequently. He had me questioning whether I was wrong about Evangelicals being able to be friends with people like me. I thought maybe Marty was “the one!”  Marty’s friendliness went on for several months until I began to notice an increased level of hostility in his comments. And sure enough…one day…the shit hit the fan and Marty went full-bore fundamentalist on me. He told me, well told everyone since it was in a blog comment, that he knew the REAL reason I was not a Christian. When pressed to disclose this reason he refused to do so. The discussions became more shrill, Marty became more defensive and preachy, and eventually I had to ban Marty from commenting. In one of his last comments Marty whined and complained over being persecuted by me and other atheists who responded to his comments.

I could share dozens of similar stories that illustrate why many ex-Christians rebuff attempts by Evangelicals to befriend them.  Here are a few things I have learned from all of these failed friendships:

In other words, they can never be my friend because they are unable to love me and accept me as I am. They love Jesus too much to leave me in the state I am in. I am like a beautiful woman who is constantly chased by suitors. As soon as a potential suitor comes sniffing around I ask them, so do really want to love me and marry me or, pardon the bluntness, do you just want to fuck me?

Perhaps today will be the day that an Evangelical will be friends enough with me to let me go to hell. I doubt it, but like my lack of belief in God, it is possible that there really is an Evangelical somewhere that values personal relationships more than right beliefs. I just haven’t met one yet.

I am not implying TW is an Evangelical. I don’t know what his beliefs are, and some of the things he says in his comment make me think he is not an Evangelical.  I hope he answers Erin and John’s concerns.

January 28, 2014 Quoting Quiverfull: Were We Even Watching the Same Program?
Recent Comments
25 Comments | Leave a Comment
Browse Our Archives
get the latest from
Nonreligious
Sign up for our newsletter
POPULAR AT PATHEOS Nonreligious
1