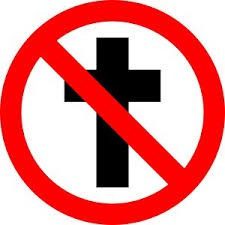 …Some in the secular world want to cooperate with moderates &/or liberal-minded theists.  I think it’s probably a noble thing to attempt.  The thing is, for me, and likely for many others it reminds me of playing skip at recess time with a bully.  The bully has chased you for years, kicked you in the gut and hoped you’d burn in hell, and will be waiting to do it to you all over again after school . . . but it’s okay to skip at recess time with the bully…

Evangelicalism, with its fundamentalist tendencies, is harmful emotionally, mentally, intellectually, and, at times, physically. I make no apology for thinking this. Yes, I know there are decent, kind, thoughtful Evangelicals, but, as Zoe would say, they still think non-Christians are going to hell. (and if they don’t, they really aren’t Evangelical) Any religion that believes that their God will some day torture people in hell for eternity is not a religion that is good for anyone. The sooner Evangelicalism dies, the better off we all will be. Harsh? Yep. And I mean to be.

There are also liberal/progressive Christians that use Evangelical methodology when they talk about their faith and interact with non-Christians.  I wonder if some of these people aren’t really Evangelicals who happen to like liturgical worship or want freedom from the social strictures of Evangelicalism? They still hang on to the belief that Bible is a supernatural book and that every sinner needs salvation.  The two key questions I ask someone who says they are a liberal/progressive Christian are:

While I may skip rope every so often with the playground bully, I totally understand where Zoe is coming from. I am often mentally and emotionally wore out from having to deal with Christianity and Christians everywhere I turn.  I live in an area that is predominantly white, Republican, and Evangelical, and I am constantly bombarded by beliefs and practices I don’t agree with. Unless I shut myself off from the outside world, there is no escaping it. Some days, I want to take the jump rope and wrap it around the neck of the playground bully and strangle him.

Now, before some Christian get all sanctimonious and self-righteous and tells me, hey we have a right to live in this country too, I want them to walk in the shoes of an atheist/agnostic for a few days. Christians who whine, gripe, moan, complain, and bitch about being persecuted are delusional. They are the majority in this country and have great privilege,  Try being an atheist for a while, you know Satan’s spawn, a molester of children, a moral deviant, a hater of God, a communist,  as Christians likes to say about us. (and it is for this reason many atheists stay in the closet)

Atheists are expected to smile and live with whatever shit Christians dump at their doorstep. We are treated like the ugly, redheaded stepchild. We are routinely ostracized, and many Christians think they have the right to attack us, slander us,and lie about us. Evidently, the teachings of the Bible don’t apply when a Christian is interacting with an atheist.

When a person has to deal with this day in and day out, even from family members, they can reach the end of jump rope Zoe mentioned in her post. Then there is no more trying to get along, no more trying to find common ground. Sometimes the wounds of our religious past run so deep that we can not bear to be around anything that is remotely religious. These things are a reminder of the abuse and damage that has deeply affected our lives. It’s like being in the same room with an ex-husband that used to beat the shit out of you. Not a good place to be.