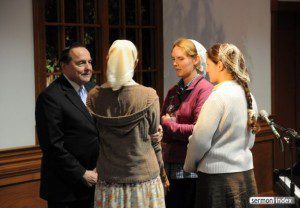 For the past few days I’ve been reading through the accounts by ladies who’d worked with Bill Gothard, ATI’s founder and venerated head, over at Recovered Grace. They all give very similar versions of their time with Bill, being inappropriately touched, and treated with a creepy flirtatiousness.

Gothard openly brags about his virginity and the fact he’s never kissed a woman romantically. Yes, he might be an unkissed virginal older man but he does seem to show a penchant for playing footsy with his young lady targets. Clearly inappropriate given the relative age difference and the relationship of boss to underling. Against the law in most places.

Recovering Grace – The Gothard Files: A Case for Disqualification

The stories of the ladies who experienced sexual harassment

My question is do you think Bill Gothard needs to publicly admit and atone for his behavior? What needs to happen next?

February 4, 2014
Quoting Quiverfull: Huge Responsibility Weighing On You?
Next Post

February 5, 2014 Quoting Quiverfull: Opposite Sex Friendships?
Recent Comments
18 Comments | Leave a Comment
"This is late, partly bc of my preoccupation and partly bc I'd been slowly reading ..."
Jennifer Serena’s Serenity – Luxury Hotel, Birthing ..."
"Thank you for your commitment to truth and love, Suzanne. Best wishes to you and ..."
Meredith Anne Not a Goodbye, More of a ..."
"For your sake, I am so glad you will no longer be editing and managing ..."
Lana Not a Goodbye, More of a ..."
"For what it's worth, I've learned a lot from you about a Very Creepy movement ..."
Griff Pryce Not a Goodbye, More of a ..."
Browse Our Archives
get the latest from
Nonreligious
Sign up for our newsletter
POPULAR AT PATHEOS Nonreligious
1