Fitting In (Or Not)

Fitting In (Or Not) February 1, 2014 Suzanne Titkemeyer 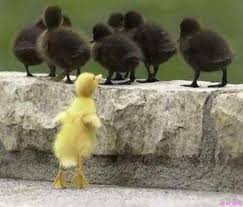 by Kristin Rosser cross posted from her blog Wordgazer’s Words

It seems like I’ve spent most of my life until recently trying to fit in, and worrying about not fitting in. When I was young, like most kids who aren’t into sports, fashion or other aspects of mainstream culture, I looked for alternate groups to belong to– and found them in high school through band and the speech team, and eventually, in the church.

I remember making fun of the jocks and cheerleaders and student leaders, though never to their faces, of course.  But it made us feel better, as members of the less cool groups, to believe that it was actually the popular kids who were inferior in some way to us.  Human nature, really.

I learned, like many of us did, to adapt myself to the groups I was in, to try to fit in better.  I think that’s why, when I joined Maranatha Campus Ministries in college, I ended up going right along with the most of the pressures to conform, even as far as participating in ostracizing former members.  In some ways the real me got lost.  Yet I never could bring myself to be actively unkind or cruel to anyone.  Judgmental, yes.  Passive-aggressive, yes.  But not cruel.

Eventually Maranatha Campus Ministries dissolved, and our church (I was married by this time) became Grace Christian Fellowship.  And Grace Christian really did try to improve in the area of extending grace to all people.  But gradually the expectation reasserted itself that everyone in the group was to have the same vision and be working towards the same overarching purpose, which was to start new churches all over the globe.  And somehow, even though we’d been part of the church for so long, my husband and I just never felt part of that calling.  So we talked to the pastor and moved on, amicably enough.

We had made it through the hard times of authoritarian coercion and spiritual abuse, only to leave when the church finally grew willing to let people leave without hurting them for doing it.  We didn’t fit in.  No matter how we’d tried, no matter how much we pretended, we never really had.  Probably that’s part of why we married one another!

During the next few years, as my second child grew past toddlerhood and I began to have more time to think and figure out who I was now, I worked on redefining my faith.  We found a new church, an Independent Church of Christ which, while it was involved in missions, focused more on the community we actually lived in.  It attracted us chiefly because the pastors were very up-front about allowing disagreement on all sorts of things, as long as you believed that Jesus was the Christ and had died for your sins and risen from the dead.  Since those were the things we knew we still believed, we were happy to become part of this new group.

Somewhere around 2002 I got really interested in the Internet and online communities.  And though this may seem off-topic (it really isn’t), I started reading a graphic novel series called Elfquest, written and drawn by Wendy and Richard Pini.  Elfquest is about a group of woodland elves who manifestly don’t fit in to the primitive world of humans where they live.  Though they have found ways to adapt to life as they know it, it becomes gradually clear that they aren’t from this place-– and they begin to seek out other lost tribes of elves scattered over the planet, and eventually find the interplanetary vessel they originally arrived in and begin to redefine themselves and their lives in light of that knowledge.

This series somehow got right under my skin and resonated with me like few things ever had.  I joined an Elfquest discussion forum (feeling very odd about doing something so fannish and so outside my Christian comfort zone) and began to interact with people all over the world who, except for their love of this series, simply didn’t think the way I did!  I wanted to “do unto them as I would have them do unto me,” so I opened my mind and heart to listen and truly hear where they were coming from, to connect with them.  But though I became an integral part of the Elfquest online forum, I never really quite fit in there, either. My monogamous sexual ethics and dislike of erotica were usually looked on as “hang-ups,” even though I didn’t try to impose them on anyone else.

I think now, looking back on it, that this was my first real foray into doing what Christ said and being “in the world, though not of the world.”  Ever since I had become a Christian, I had lived in one insular community or another, rarely (outside of work) ever talking to anyone who wasn’t an evangelical Christian.  Now I found there was a lot to learn, a lot of good to be gained, from treating non-Christians as real people and not just targets for evangelizing.

Needless to say, this shoved the redefinition of my faith into high gear as I had to confront issues I’d never really looked at before, talking to people who had strong reasons for being pagan or shamanist or atheist.  Interestingly, as I accepted them for who they were, they accepted me for who I was. They even let me “witness” to them sometimes when I did it respectfully, honoring their right to believe differently than I did.  When their challenges to my beliefs got beyond what I could handle and my faith went into a sort of crisis mode, one of them (an agnostic) kindly directed me to a place that could help me:  the Doxa website and forum.

Doxa helped me find my own way to understand Christianity through the new, more open mindset I had learned to embrace.  I started to look at the Bible differently, as more of a narrative and less of a rule book, as I’ve already shared extensively on this blog.  However, in many important ways I was, and still am, a child of the evangelical Christianity I first knew.  I’m still an evangelical in the way defined by Jim Wallis over at Sojourner’s Online Magazine:

I believe in one God, the centrality and Lordship of God’s son Jesus Christ, the power of the Holy Spirit, the authority of the scriptures, the saving death of the crucified Christ and his bodily resurrection — not as a metaphor but a historical event. Yep, the whole nine yards.

And yet because I’ve gradually become more politically liberal and less in line with certain hot-button evangelical ideas like young-earth creation and complementarianism, I don’t fit in very well any more with evangelicalism, and I’ve come to identify myself as a “post-evangelical.” Also, because of Maranatha (as I’ve discussed before), I still tend to shrink back from full involvement in every aspect of my church.  But I have visited more mainstream churches like Lutheran, Methodist and Episcopal, and have found that my lack of enjoyment of liturgy and ritual, and my foundational evangelical mindset, really kept me from fitting in very well in those churches, either.

What it comes down to is that I’ve had to reconcile myself to the idea that there’s pretty much always going to be some way that I don’t fit in.  But another thing I’ve come to understand is that fitting in isn’t really what life is all about.

The New Testament talks about Christians being fitted together as “living stones. . . being built into a spiritual house” (1 Peter 2:5).  It says the church is “the body of Christ, and each one of you is a part of it.” 1 Corinthians 12:27.  But at least some of these passages emphasize, not fitting in, not conformity and sameness, but the differences between the individual parts.

For just as we have many members in one body and all the members do not have the same function, so we, who are many, are one body in Christ, and individually members one of another. Since we have gifts that differ according to the grace given to us, each of us is to exercise them accordingly. . .
Romans 12:4-6

If anything, what I’ve come to seek in my life isn’t to fit in, but simply to be accepted, and to accept others.  As Jenny Lind Schmidt said in Psychology Today, it’s quite possible to belong even though you don’t fit in— if your community will accept you as having a valid place among them despite your differences.

This is why I identify with Samantha at Defeating the Dragons when she talks about why she stays in a church where she doesn’t agree with every policy:

In the church I attend, though, even though I’m a heretic by most Protestant standards (between the universalism-ish and the Pelagianism . . .), and even though I’m a pro-choice Democrat, I can talk about that with the people I go to church with, in my small group and in my theology program, and not face any condemnation or judgment for that. And it’s because, right along with racial diversity, the motto “in essentials unity, in non-essentials liberty, in all things charity” is taken pretty doggone seriously. There are Quiverful families in this church, and there are single working mothers, and there are politics of all stripes, and we all go to church together– and we’re led by people who have no patience for self-righteousness and judgment.

A body with many parts, all different, each valuing the others.  That’s what the 12th chapters of Romans and 1 Corinthians are both talking about.  Using 1 Peter 2:5’s metaphor, it turns out Jesus can somehow miraculously build a house where the bricks can be fitted together even though they don’t fit in the way identical bricks do.

So I don’t worry so much about not fitting in any more.  It’s enough just to enjoy the journey with my fellow travelers.

Of all kinds, in all combinations.  That’s what this beautiful and varied thing called humanity is all about.

February 2, 2014 Quoting Quiverfull: Putting Off Marriage To Get An Education?
Recent Comments
1 Comment | Leave a Comment
Browse Our Archives
get the latest from
Nonreligious
Sign up for our newsletter
POPULAR AT PATHEOS Nonreligious
1