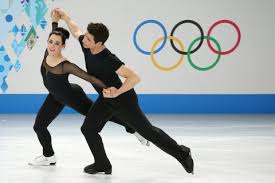 Sochi is helping me be a better husband. And the Olympics are freshly making my wife to delight in her role as well. The surprising lesson is on display in figure skating pairs.

At its best, this event displays the strength and beauty of unity: how two different people become one. The gold goes to that couple which has most mastered the skill of male leadership and female support making one glorious whole.

He Leads, She Receives

He leads her onto the ice and initiates each part of their routine. She receives that leadership and trusts in his strength. His raw physical strength is more on display than hers; he does all the lifting, twirling and catching. She complements his strength with her own; a more diminutive and more attractive strength of beauty, grace, speed and balance. His focus as the head or leader is to magnifying her skills. Her focus is on following his lead and signaling her readiness to receive his next move. He takes responsibility for the two of them and she trusts his leadership and delights in it.

If he makes a mistake, she pays the larger physical price; he pays the larger emotional price. She falls, but he fails! So he has to learn to initiate and risk. She has to help him understand her moves and to endure his learning curve.

They do not fight for equality on the ice; they possess it as a given. They are not jostling about fairness. They are focused on doing their part well. No one yells, “Oppressor!” as he leads her around the arena, lifting her up and catapulting her into a triple spin. No one thinks she is belittled as she takes her lead from him, skating backwards to his forward. No one calls for them to be egalitarian. “She should get to throw him into a triple Lutz half the time!” They complement each other in their complementarian approach to becoming one majestic whole. No one, least of all him, minds that the roses and teddy bears, thrown onto the ice when they have collapsed into each other’s arms at the end, are for her. It is his joy.

This is a visible model of what male leadership and female support are all about. It’s an art form, not a mandate. It’s a disposition, not a set of rules. When it’s done well, it’s a welcome sight in which both partners are fulfilled in themselves and delighted in the other.

It Takes Practice and Patience

Olympic skaters would be the first to agree that this unity takes practice and patience. They pay the price of achievement in bruises, cuts, twisted ankles, and sore shoulders. But alternative approaches only add more pain and yield less satisfaction.

So watch in Sochi what the grit and the gold of complementarianism is all about. Then bring some true grit to doing things right in matters of the heart.

February 12, 2014 Religious What The Heck: Naked Church
Recent Comments
51 Comments | Leave a Comment
Browse Our Archives
get the latest from
Nonreligious
Sign up for our newsletter
POPULAR AT PATHEOS Nonreligious
1