What Is Rape Culture? 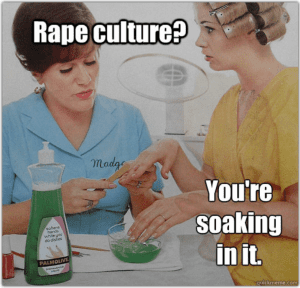 Buzzfeed.com had an awesome article today laying out exactly what Rape Culture actually is. They even had photos to illustrate the problem and that song by Robin Thicke that is a perfect example of rape culture and the lack of informed consent – Blurred Lines.

If you haven’t seen the video or heard the song here it is. Not safe for work.

The writers and editors did an outstanding job breaking down what Rape Culture is, the only problem was they failed to include the whole impossible Purity Culture Rape Culture in Biblical Patriarchy. They left it entirely out. No talk about ‘taking her myself’ on the wedding night, no Vaughn Ohlman-esque ponderings on women never having the right to refuse a “Godly” husband sex, nothing by Debi Pearl urging you to play along with your man’s sexual needs even when you hate it. Not one thing about how Fundamentalist Christianity tends to view all women as walking vaginas free to plow at any time regardless of consent, while insisting on virginity and virginal behavior.

One of the bigger problems in the Christianity version of Rape Culture is that with girls being taught to stay sweet, obey orders and be sexually innocent is that it sets these same young women and girls up to be victims/targets by the males surrounding them and not even realize it. Look at the stories of all the women sexually harassed by ATI head Bill Gothard, one of the big things those ladies had in common is not realizing while it was going on that he had clearly crossed a line into Rape Culture. Hard to recognize a creep with impure motives when you’ve been sheltered to the point where you don’t know those types of predators actually exist.

My question tonight is what do we do as citizens of this nation to make sure that Rape Culture dies a swift death?

Also, I like this version of “Blurred Lines” much better, even if it’s no more safe for work than the other one. It’s more honest.

February 7, 2014 Quoting Quiverfull: Boycotting The Godly Seed?
Recent Comments
8 Comments | Leave a Comment
Browse Our Archives
get the latest from
Nonreligious
Sign up for our newsletter
POPULAR AT PATHEOS Nonreligious
1