Behind The Mask: Why We Join Patriarchy & Mask Our True Selves

Behind The Mask: Why We Join Patriarchy & Mask Our True Selves March 18, 2014 Suzanne Titkemeyer 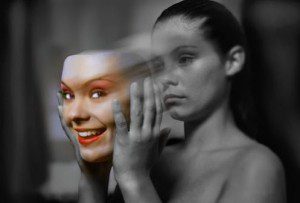 Have you ever asked yourself exactly how women get into fundamentalist-patriarchy Christianity and why they stay? What emotional payoff are they getting? What drives the desire to completely immerse oneself into a system that devalues you as a human? Giving up all autonomy for the sake of male rule?

Or are they really submissive or is it just a facade to cover up what’s really going on inside? Seeing Michelle Duggar last week confirmed everything I’d been thinking about the submissive mask many women wear in Dominionism while actually being in charge of the family AND the husband. Lip service and control behind the scenes

Back in my days attempting to be a fully submissive wife and a perfect Christian mother I observed an odd trend, the deeper into fundamentalist religion a family was, the more it seemed that the wife/mother of the family was the one spearheading the journey into the more radical territory. The men seemed to trail behind their wives, not nearly as spiritually committed but eventually seizing upon the extreme beliefs of their wives.

Why the push of women to drag their husbands into radical evangelical-fundamentalist territory with all of its rules, legalism and bondage? Because behind the masks of Good Christian Submissive Wife they’re actually in control.

Are they aware of this? Actively aware? No. But in the their subconscious, the unexamined parts of their mind is where this thought pattern that leads to fundamentalism to control what she cannot cope with lurks.

Vyckie Garrison and I have talked many times about the drive to plunge families and husbands into the most radical forms of Christianity. Here’s what she thinks.

My theory is that when the man is not much of a leader and he is slacking, leaving his wife to carry most of the burden of keeping the family together … the wife, who is stuck with him because God hates divorce, starts looking for ways to get the bum to step up to the plate … It is indirect control of the man … a weird psychological mind game in which she, by her submission and obedience, she is controlling God who has promised to make something beautiful of her marriage.

She knows she can’t change her husband, so she gets on the good side of the One who can change him. Of course, the man has to already have some controlling tendencies himself. I’ve noticed that men who are inherently egalitarian, when they encounter patriarchal teachings of headship/submission, are not at all interested. They want a partner, not a Stepford wife.

And patriarchy is the perfect way for them to feel big and brave. The wives have the idea that what they need is an ego-boost, but self-esteem is anti-Christian, so they go for the whole “head of the home” thing instead. It is very twisted.

While I agree with Vyckie on everything she’s said above I have to go a bit further. It’s not only those in bad marriages or married to someone not engaged with being a good husband, but it’s also those women that have untreated psychological issues, perhaps an addiction or an unhealthy tendency. For example, someone like Michelle Duggar.

Michelle has already come out and admitted she struggled with bulimia as a teen. A popular cheerleader with a secret condition. Bulimia is controlling one of the few things you can. It’s an addiction and it’s a control issue. In “Growing Up Duggar” Michelle says she was able to stop her bulimia merely by having a teenaged Jim Bob as her accountability partner.

I call fiddlesticks on that. Most of the time anyone with an addiction and/or control issues is not just able to ‘walk away’ from them unscathed without doing some serious in depth work on themselves with a trained professional. What happens is the addiction/control issue merely gets transferred to something else. Like to religion. To family. To every aspect of life.

That’s my big take away from the book signing, seeing Michelle Duggar simperingly ask permission from Jim Bob to get up and speak, going ahead and speaking after his mild ‘approval’. It was almost a rote occurrence if body language is anything to go by. I’ve noticed on their show and other media outlets that Jim Bob says that Michelle is the one that decides when their family is finished and have noticed that he seems to be a genial go-along kind of a guy, not a ‘leader’ That fits with the pattern Vyckie has come up with.

Michelle is just like all the rest of us who’ve found ourselves in that mask of subservience while trying to control it all behind the scenes. Look at the chore charts, the ATI homeschooling, the keeping everyone home unpolluted by the outside world, the constant pushing of her life choices in front of a television audience and tell me she’s not dealing with significant control issues. She’s transferred whatever it was that started her on the road to bulimia onto religion as a form of control.

Being seen as a submissive Christian wife is one of the greatest covers for being the controlling one behind the scenes. Look at the types of men that there are in Biblical patriarchy, either very sort of mild-mannered or controlling, with both types eventually becoming more controlling themselves as time goes on.

As the relationship changes and the wife carries the family deeper into fundamentalism, the wife shifts her control methods, seeking to make the man think he’s in control when it’s really just her manipulating him. Everyone ends up forced into unnatural roles, stuck in an existence that is dissonant to their actual feelings. It’s usually too late by then, the man likes being in the tin plated dicator role and the wife has discovered it takes an enormous amount of hard work and effort to keep the entire fake show running.

And why do people try to control everything in their path? Because they are afraid. Fear drives all of this.

March 18, 2014
Quoting Quiverfull: To That Girl Who Just Broke Off Her Courtship
Next Post

March 19, 2014 Quoting Quiverfull: Homeschooling Can Only Be Perfect When Public School Is?
Recent Comments
33 Comments | Leave a Comment
Browse Our Archives
get the latest from
Nonreligious
Sign up for our newsletter
POPULAR AT PATHEOS Nonreligious
1