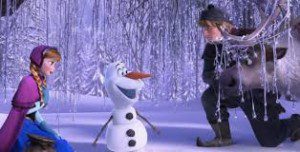 You have to see this before I start talking about “Frozen”. Of the many wonderful versions of the song ‘Let It Go’ from “Frozen” I think this one personally tops them all. But then again I love classical music so blending the song with Vivaldi’s “Winter” makes sense to me.

One of the biggest drags of getting older is no longer having an excuse to go see Disney movies. I wanted to see “Frozen” after reading so many people on the blogsphere talking about how this was one of the best Disney princess films and it managed to avoid the obvious princess-y behaviors that made the older films not exactly showing behavior you wanted your daughter to emulate. Hello? True love at first sight moving to marriage before anyone bothered checking if they were even slightly compatible?

I went to an early afternoon matinee of “Frozen”, slinking in past the few families with kids and sitting alone on the back row. As I huddled down and started inhaling my popcorn I had to chuckle upon seeing a teenage boy also sneak around the theater before picking a seat in a likely child free zone. I guess I wasn’t the only non-child person in my tiny town that wanted to see the movie.

There was a great deal to love about the film, the princess Anna was being voiced by one of my favorite actresses, Kristen Bell. The artistry of the film was breathtaking, the songs were great and the messages mostly positive. Of all the characters my favorite was Olaf the snowman, who had a strange nativity and truthfulness about his being.

But on a deeper level I could relate more to Anna’s sister, Princess Elsa. Elsa desperately trying to control herself, deny who she really was in her truest form only to run off from those that think she’s some sort of monster. For me personally it was symbolic of my years at my old church, trying to fit in, tamping down the real me before leaving and being thought of as apostate while my true me emerged. Pain, isolation, misunderstanding followed by freedom and embracing who you really are.

One of the bloggers I read occasionally related it to his own struggles with depression (wanted to post his review at NLQ but he was swamped and didn’t get back to me in time, here it is anyway – Gasp! There ARE Hidden Messages in Disney’s Frozen.) I think that is the beauty of the film, it’s truth is as varied and multi-layered as our own selves. People get out of it how Elsa’s struggle relates to their own lives.

The other big message I walked away from this film with is that love is the final message, the only thing that matters. Love endures, love frees, love thinks not of itself. Not romantic love, but the love of family, love for friends. Love is the strongest force in the universe if we would stop fearing and put that love into action.

So when someone forwarded to me a review of “Frozen” from a lady that blogs at A Well-Behaved Mormon Woman claiming that the movie pushes some sort of evil Gay agenda I had to wonder if we’d even seen the same movie! Did I miss Olaf doing something outrageous or did that sauna bit at Oaken’s involve some same sex shenanigans?

After reading through her thoughts on this it’s pretty obvious that this lady sees gays everywhere and somehow feels like they’re threatening her way of life by just existing. She presages her explanation on why “Frozen” is some liberal gay-agenda piece of detritus with these words

Sidebar: Let me be very clear about one thing, I am not anti-gay nor am I here to judge homosexuals not worthy of their rightful and respectful place among society. However, I draw the line at the idea of redefining traditional marriage to include homosexual relationships, as equal. Meaning, that as a Christian, I believe that acting on same-sex attraction is contrary to God’s will, and therefore SSM should not be legalized. Because I hold this value and voice it freely, does not mean that I am trying to force it on anyone – anymore than those who feel opposite and advocate for their position intend to force SSM on me, personally – both have the right [to freely advocate an oppositional position] and should not be demonized, regardless of where society takes us, as a whole.

and then starts to link every possible tiny bit of the story to The Gay Agenda.

Maybe I have my liberal Christian blinders on but I’m just not seeing it. A girl with the ability to freeze the world running away to her ice palace in the mountains is not a representation of some person of a different sexuality going to hide in a figurative emotional closet. It’s a reach at best… and her opinions sort of go downhill from there.

Watch part of the movie yourself and tell me it has any agenda other than the importance of love. (Warning: This part spoilers the ending of the movie)

Nonreligious
Love is a Luxury?
No Longer Quivering