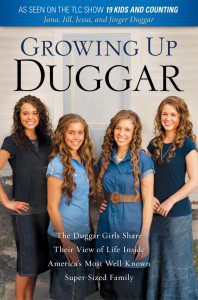 If there’s one thing you can count on, like the swallows returning to Capistrano yearly, it’s that any book written (or ghostwritten) by the Duggar family will contain answers to viewers questions. Growing Up Duggar is no exception. The Foreword/Greetings lays this out quite quickly.

For some reason the Duggars (and many other Evangelicals) cannot handle anyone having questions or doubts about their way of life. We’ve seen this clearly in the many Duggar specials on TLC and on their television series “19 Kids & Counting” And the family have two ways only of dealing with the questions, either they drop or hide something like ‘blanket training’ as it appeared in the first special or they change what they are doing on the show, like the time people on Television Without Pity were criticizing the meals the Duggars made as being all processed bad for you foods, and then the next special made a big deal of the kids being seen getting fresh oranges with their processed meat on white bread sandwiches.

Writing their books gives them a third option, answering (defending their choices) the questions in print. Heaven forfend that someone might raise an objection to their lifestyle, which to me speaks of a fundamental insecurity about what they are doing and just another attempt to keep the family in the media so that the money will continue to roll in.

Almost everything about the Duggar band wagon revolves around keeping the money train on the tracks. This book is no exception.

And now for some humble bragging all to common in Fundamentalism too.

“Maybe you’re that girl we met in the locked ward–we still call it the cage–in the orphanage in Central America. Jana sat with you there and shared your hope that someday you would see your mother again.

Maybe you’re the single mom whose baby Jill helped deliver as an apprentice midwife. You smiled and nodded when Jill asked if it would be okay if she said a prayer for your newborn babe.

You might be the mom who approached Jessa after we spoke at a women’s conference somewhere. You asked for ideas about how you could be more helpful and encouraging to your teenage daughter as she struggles with relationships involving boys.

Or perhaps you’re the girl Jinger met while she was ministering at the juvenile detention center. You could hardly bring yourself to believe God could really forgive you. But Jinger assured you He can. And will.”

Fundamental/Evangelical approved occupations for stay-at-home daughters instead of college. Not that these are bad things, not at all, but when these are your only choices for going outside the compound walls it’s a bit limiting. That’s one of my big problems with the Duggar family and this book, the fact that the female members of the family are granted no agency of their own, no freedom, only what Daddy deems to be worthy.

The girls state that the purpose of the book is..

“..to continue the conversations we started with you but couldn’t finish”

Being the cynical old coot that I am I read those statements and feel the earnest squeaky-clean-image of the Duggar ladies and wonder how people being raised like veal in a box could possibly have enough life experience, sense of self and lack of cognitive dissonance to do just what they’re proposing. Poor things.

Next up: How the Duggars decided God wanted them to have a television show and making a difference in your relationships.