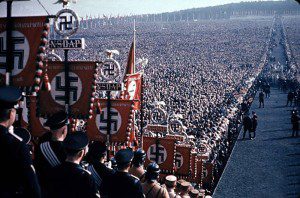 Yesterday, Kevin Swanson of Generations Radio posted an interview with conservative author and speaker Eric Metaxas, showing once again that it is almost impossible for a Religious Right figure tobesoextreme that others will refuse to associate with them.

While promoting his book on Dietrich Bonhoeffer, Metaxas said that the emergence of Protestant churches that accept gays and lesbians is proof that the US is turning into Nazi Germany.

“I’m talking about the theological liberals in the mainstream church that is just getting off in a whole other direction where they are just failing to teach biblical orthodoxy, failing to teach the Bible as the word of God and yet they still think of themselves as the church,” he said. “We see that obviously happening in issues of sexuality, but how can you say that most mainline denominations in America today are profoundly Christian when they have given up the ghost on all of these fundamentals of the faith? You had the exact same thing happening in Germany. It’s just setting things up so that when evil comes, where do people turn?”

Swanson agreed that the “abortion holocaust” and the “significant rise of homosexuality, something that Nazi Germany was seeing in the 1920s and 1930s,” show that America is on its way to Nazism.

March 21, 2014 Why Pulling Back Birth Control Availability Does Not Work (A Response To Ladies Against Feminism)
Recent Comments
10 Comments | Leave a Comment
Browse Our Archives
Follow Us!