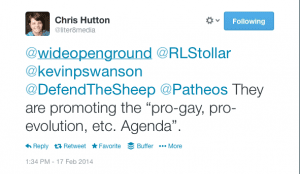 Spiritual Sounding Board wrote about a recent Kevin Swanson hissy fit where he defended ATI’s Bill Gothard, you know the guy, we’ve written about Gothard here a great deal and started speaking out a few months ago about the survivors of his sexual harassment and abuse of teenagers as it’s been reported over at Recovering Grace.

Yes, yes after Swanson wrote about how Gothard should face some sort of investigation of the charges by a board of his peers he’s now done a 180 degrees spin at warp speed, proclaiming those of us on Patheos, SSB and other blogs talking about the situation are ‘apostates’. He just wants us meek little wimmenfolk to shut up about righteous man stuff. No way buddy is that ever happening. If one of our sisters is being abused by patriarchy it ripples out to effect us all. Sweep it all under the rug and pretend all those ladies were having premenstral hallucinations or something is what Swanson wants.

Here’s a transcript of Swanson’s remarks from Spiritual Sounding Board.

Now, friends, right now Patheos and Spiritual Sounding Board are the apostatizing websites working hard to drive another 10% out of the organized historical, Biblical churches to a pro-homosexual, pro-socialist, pro-evolution, pro-atheist agenda. I mean, they’re just so excited if they can…they’re sort of like the aprostalites (SIC ed.note Stupid made up fake word by Swanson) of the left you know.

Can we get more to apostatize from the Biblical, spiritual faith, and they’re somewhat successful

mainly because whatever is out there that cloaks itself as a fundamentalist faith often times isn’t that strong anyway. So, anyway. Patheos and Spiritual Sounding Board are dancing on the grave of Bill Gothard and the whole A.T.I. thing right now. This is what’s happened. And the rumors on the street is that there was more sexual abuse of some sort. But here is the deal. As Christians we ought to be very careful when we see these things on public websites, new sites, presenting this information.

We ought to demand two or three witnesses in a proper church court or a proper civil court. That ought to be important to us. And, uh. You know. But Patheos and Sounding Board doesn’t really care that much about it. They just get very excited about the fact that there may be some problem, some compromise, in the life of a spiritual leader. And if they can find that, they kind find the compromise, the moral compromise in the life of a leader, they get very excited because now they know that they can toss out everything that guy ever said about God,

they get so excited, Steve, I think.

SV:Yeah, and that’s. They want to be free from God. That’s why they’re worshiping themselves, or the whole humanist religion. Because they’ve been seeking to be free from God all their lives. And they can’t get free of Him. And it just, it’s like a cockroach trying to get away from the light to get into darkness. And they’ve found that they can’t get away from the light. And anytime that they can find any kind of darkness within the fundamentalist movement

Kevin Swanson, I just have to ask. Why are all of your shows and writings mentioning bestiality in situations that have nothing to do with bestiality? If you are constantly thinking about sex with animals you should probably find a good counselor in your town. They might even have a publicly funded community mental health organization that has a sliding billing scale that you could surely afford. Normal people do not run about talking about sex with animals all the time. It’s creepy and sick. Please stay away from your neighbors farm animals and away from my precious cats!

March 15, 2014
Quoting Quiverfull: Let's All Blame The Beatles?
Next Post

March 15, 2014 Why Highland Park Baptist Church Leaders Should Go To Jail
Recent Comments
23 Comments | Leave a Comment
Browse Our Archives
get the latest from
Nonreligious
Sign up for our newsletter
POPULAR AT PATHEOS Nonreligious
1