The Logical Fallacy of “Equal But Subordinate” 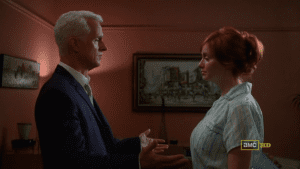 by Kristen Rosser cross posted from her blog Wordgazer’s Words

Julie Anne over at Spiritual Sounding Board has drawn the blogosphere’s attention this week to an article that the Council for Biblical Manhood and Womanhood (“CBMW”) posted in its Spring 2006 Journal entitled “Relationships and Roles in the New Creation,” written by Mark David Walton. Spiritual Sounding Board put up its first post on this dated March 12, 2014, and the CBMW has since removed this article from its website.  However, this screen shot captures the withdrawn article.

The gist of the article is that male headship and female subordination are part of the very nature of manhood and womanhood, and thus will continue in the next life: that the full arrival of the New Creation in Christ will simply be a more complete and joyful enacting of our gender roles.

In referring to “gender roles,” CMBW does not mean only that women take care of the house while men provide for the house; indeed, if that were the extent of it, it would be annoying but not nearly so dangerous.  No, what CBMW means by “gender roles” is that men were designed by God for “headship” over women, while women were designed by God for “joyful submission” to male headship (i.e., willing subordination).  Since according to CBMW, headship and subordination are part and parcel of what it means, respectively, to be a man or a woman, the logical conclusion would in fact be that these would continue into the next life. As the article puts it:

Complementarity [by which is meant male headship/female subordination] is not just an accommodation to the less-than-perfect conditions that prevailed during the first century.  Rather, it is a divine principle weaved into the fabric of God’s order for the universe. . . . To deny the very concept of male headship on the false assumption that it is incompatible with creation ideals is, at best, reckless theology.

The Strange Figures blog has written a very humorous parody of the article– here’s a sample:

To our dear sisters in Christ,

Greetings to you in the name of our great God and Savior Jesus Christ, who has bought us with His blood, purchasing for Himself a people reflecting the richness of biblical manhood and womanhood. . .

For we have taught you always that your rank as women is part of the divine order, God’s prelapsarian will for the “better half” of his highest creation (if you will permit us a tiny and theologically unsound joke). If submission is God’s will for you in this mortal life, would it not also be His will for you in heaven? Heaven will be a return to the lost edenic dream in which you were created to be helpmeets to the “adams” God has appointed over you, and we look forward with anticipation to the blessings that will come to you when that perfect vision is restored.

Besides the fact that the idea of a new heavens and new earth in which I as a woman will be eternally subordinate– perhaps to all males, but at least to my husband, my father, my father-in-law, my grandfather, my grandfather-in-law (and so on down to the roots of the family tree) smells a bit more of fire and brimstone than any self-respecting concept of eternal bliss really has any business smelling of– there are some serious logical flaws in this whole line of thought.

I want to particularly address this line of reasoning from the article:

At the very heart of the feminist movement is the conviction that there can be no true equality as long as gender-based differentiation of roles and responsibility remain. . . Only where there is functional equivalence between the sexes does equality exist. . . [But this] premise is false because functional equivalence cannot be genuinely necessary to genuine equality.  A biblical worldview understands that the locus of worth of a human life does not reside in any physical, emotional or intellectual attribute or possession.  Neither is it to be found in the individual’s functionality or potential for productivity.  The worth of each person is based upon the truth that he or she bears the imago dei, the image of God. . . . Feminists, both secular and evangelical, define equality in terms of functionality rather than ontologically– on the basis of being.  They err by effectively reducing equality to “sameness”. . . We can be certain, however, that the new creation will be characterized not by sameness but by incredible diversity- diversity of abilities, diversity of gifts, and diversity of rewards. [Emphases in original.]

The difficulty here, of course, is that no “feminists” have actually denied this.  As a Christian egalitarian and a Jesus feminist, I do not in fact believe what he says I believe: that functional equivalence is necessary for true equality– nor is this conclusion implied by my position.  The idea is not that a particular man and a particular woman cannot be equal if he is leadership-oriented and she really prefers a supportive role.  No– the egalitarian/feminist objection to male headship is not based on a requirement for functional equivalence.  The objection is actually based on a false equation: that male headship/female subordination IS actually a functional difference. It is in reality an ontological one.

In order to see where I’m going with this, it’s important to understand the distinction between necessary (or essential) and accidental properties, as these terms are used in philosophy.  As the Stanford Encyclopedia of Philosophy explains:

In the ordering of his creation. . . God formed the man first and gave him responsibility and authority as the head of the human race.  This headship, far from being a result of the fall – feminist and egalitarian claims notwithstanding – is a central feature of the divine created order.  Because the new creation is, fundamentally, a return to the divine order that prevailed before the fall, it follows that male headship will remain in the new creation. . . . The principle of headship and submission in male-female relations is clearly affirmed in the New Testament. Furthermore, nowhere in Scripture is this principle replaced or rescinded. . .  There is every reason to believe, then, that male headship will continue as the divine order for male-female relationships. [Emphasis added.]

Notice what is happening here. God built male headship into humanity at creation and ordained that it would continue always. In other words, CMBW has assigned this quality – headship – as an essential attribute of those possessing one particular accidental trait: that of maleness. And they have assigned another quality – subordination/submission – as an essential attribute of those possessing another accidental trait: that of femaleness.  Remember that it is the essential traits that make a thing ontologically itself.  A human cannot be genetically non-human, because the human genome is essential to the being (the ontology) of humanness.  CBMW is saying that headship is part of what makes male humans ontologically male, while subordination is part of what makes female humans ontologically female.

But what does it mean to say that the subset of humans with the trait of maleness essentially possess headship, while the subset with the trait of femaleness essentially are subordinate to that headship? Submission and subordination are not positive ontological qualities in and of themselves; they are, rather, responses to the ontological quality of headship in the other.  The human with headship is the agent, the mover, the one who acts.  The subordinate human follows and responds to the agent and mover. Subordination is not an essential ability which is equal and corresponding to headship.  It is in every way a lesser and dependent quality to the quality of headship.

We simply are not talking about functional differences here!  If the nature of human maleness is headship and the nature of human femaleness is subordination, then what we have are two classes of humanity which are superior and inferior by their very natures. This is what egalitarians and feminists object to– and this is what CBMW, intentionally or not, is holding forth as a truth not simply of this world, but of the one to come.

What, then, happens to a verse like Galatians 3:28: “There is neither Jew nor Gentile, neither slave nor free, nor is there male and female, for you are all one in Christ Jesus”?  CBMW’s position is that this applies only to our standing in Christ in terms of salvation; that it means nothing with regards to male headship and female subordination in the body of Christ today or in eternity.  But if headship and subordination are essential and therefore ontological traits of male vs. female humanity, and if headship and subordination are therefore going to continue even into the fullness of the New Creation, then Galatians 3:28 means exactly nothing at all.  Our standing in Christ does not and never will add to female humanity this additional human quality of headship which it now lacks and always will lack.  In Christ, in fact, there absolutely is “male and female,” now and forever.

And yet it is the CBMW which insists that egalitarians have a “chronic conundrum” of “how to reconcile passages that are . . . plainly inconsistent” with their worldview.  Egalitarian interpretations usually show how historical-cultural understandings of particular texts give them different applications for today.  They do not simply render a scriptural passage, to all intents and purposes, moot and fundamentally meaningless.

I try to avoid in principle speculations into the motives and internal character of other Christians, so I will not offer any opinion on why CBMW has removed their article “Relationships and Roles in the New Creation” from their website.  I will simply say that the article does reflect the logical conclusion of male headship thinking, that its logical conclusion contradicts its own premise of male-female ontological equality– and that it contemplates a supposedly divine reality that I would really rather be excused from ever having to live in.

March 19, 2014
Quoting Quiverfull: When Leaders Fail We Women Should.. What?..Shut Up?
Next Post