Your Word is a Lamp For My Feet: The Crash and Burn Life of Justin Bieber and Others

Your Word is a Lamp For My Feet: The Crash and Burn Life of Justin Bieber and Others March 5, 2014 Suzanne Titkemeyer 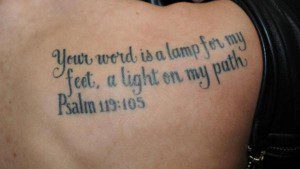 by Bruce Gerencser cross posted from his site The Way Forward

Evidently, the lamp is burnt out for the man sporting this tattoo. In recent years, this man has given himself to debauchery, violence, and mischief. He is, in every way, a self-absorbed shit concerned only with himself.

But hey, he loves Jesus.

His name is Justin Bieber. 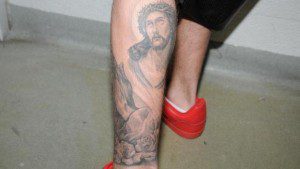 Am I mocking Bieber? No. I feel sorry for him because I know that his fundamentalist Christian upbringing is partially responsible for his current train wreck of a life.  This story has played out before our eyes countless times in the lives of people like Britney Spears, Miley Cyrus, and now Justin Bieber.

Raised with the thinking that the Bible and its anachronistic rules, is the moral standard by which they are to live, many young Christians are ill-prepared to face the real world of gray, situational ethics,and  amorality. Throw in fame, millions of dollars, and followers who are quite willing to enable your slightest desire, is it any wonder young people like Cyrus and Bieber crash and burn before our very eyes?

Some critics reduce their petulant behavior down to a child rebelling against their parents, and certainly there is some of that in most every one of these stories. But, fundamentalist Christian children are taught to “just say no.”  When tempted, pray and read the Bible.  These foolish prescriptions don’t work for adults and they most certainly won’t work for hormone raging young adults with an unlimited line of credit from American Express.

While I will readily admit that the Bible provides some moral guidance that would serve all of us well, it is not enough to trust God, trust his Word, and hope for the best. Young adults need to be taught how to cope with a world that will devour them and spit them out later on the side of the road. Young adults need to be taught the difference between want and need, and that just because you can doesn’t mean you should.

I was a young adult once, back when Richard Nixon, Gerald Ford, and Jimmy Carter roamed the halls of the White House. I know how it is to not think about tomorrow and the consequences of what I do today. We all could make a list of things we regret, things we would do differently if we had to do it all over again. Most of us escaped our youth without too much damage, but some of us know what it is to make a train wreck of our life at a young age; bad decisions that can mar a person for a lifetime.  Decisions made in a moment can cost a lifetime.

Prisons are full of people whose parents took them to church and taught them the Christian way of living. What went wrong? Too often, we want to point our fingers at the offender, and, at times, our finger-pointing is certainly justified. But, at the same time, we should point our finger at Christianity and ask what culpability Christianity and the Bible has in the moral failure of those whose lives are in the gutter.

Christian morality is often taught as a code of “thou shalt nots.” Christian young adults enter a world that does not recognize the Christian morality code. Once they wander outside the safe confines of the church and the Christian home, they find want,  pleasure, and desire are the gods of the Trinity. In this environment, “thou shalt not” can not compete. A young man like Justin Bieber, when confronted with young, beautiful women who care not about his belief in Jesus, find it impossible to “just say no.”  Only an ignorant fundamentalist Baptist preacher thinks otherwise.

Yes, we need to teach our children morals and ethics, but at the same time we need to teach them how to critically make responsible decisions. When confronted with the pleasures of the world, and believe me, the world is pleasurable, the young adult needs to know how to navigate a world that offers them everything.

The same goes for drinking alcohol and smoking marijuana. Preach away, preacher man. Scream out those Bible verses. Young Christian adults will hear you, but then they will get in a car with their friends and go to a party or a concert. And away from the confines of the morality dispensary, they will do what most kids their age do. All the preaching against giving in to peer pressure will have little effect, because the power of the herd is often irresistible. Wouldn’t it be better to teach young adults how to party responsibly? And if they find themselves high or drunk, that they can ALWAYS, no questions asked, call you for a ride home?

Part of the problem is the Evangelical (fundamentalist) Christian music subculture that turns some young men and women into instant stars. For example, take Katy Hudson. Katy Hudson? In 2001, Christianity Today, the People magazine of Evangelicalism, declared then 17 year old Katy Hudson one of the New Girls of Christian Music. Hudson’s father was, at the time, pastor of The Oasis Center is Santa Barbara, California. (now Keith Hudson Ministries)

We know Katy Hudson as Katy Perry. Fast forward almost ten years and what do we find?  After being screwed by the Christian music industry, Perry left her Evangelical roots and embarked on a pop music career, selling 11 million albums.  In 2013, Perry described her belief about God this way:

“My God has changed over the years. Absolutely. I believe there’s this ‘bigger than me’ thing that’s looking after me. I don’t believe in like God as a really old guy with a beard on a gold throne”

“I don’t believe in heaven or hell as a destination. In fact, the terms of what I believe are still up for debate because I’m still on a journey and I don’t even know if I’m going to get to my destination”.

“I’m not Buddhist, I’m not Hindu, I’m not Christian, but I still feel like I have a deep connection with God.”

A failed marriage, provocative song lyrics, and a bare-all sexuality give countless Evangelical preachers sermon illustrations to use as they attempt to keep the young men and women of their church from turning out like Katy Perry. (see Rolling Stone article, Sex, God and Katy Perry) Rarely, do they consider their own culpability in the fall of these young stars. I use the word fall from the perspective of the Christan. I don’t think Perry, or anyone else for that matter, is fallen. Bad choices=bad consequences. If we want young adults to make better choices then they need to be taught how to make better choices. Preaching, quoting Bible verses, and threatening judgment from God rarely works against the passions and desires of the mind. Young adults need to be taught critical thinking skills and they need to understand how to determine risk. They may still make bad choices, but it will not be because they didn’t know what they were getting themselves in to. Sadly, way too many Christian parents think that all their young adult children need is God and the Bible. They naïvely think that God and the Bible is a match for hormones, passion, want, and desire. As most of us can testify, God and the Bible rarely win.

I do not know if taking this approach would have led to people like Miley Cyrus and Justin Bieber choosing a different path. Sometimes, people want what they want, and all we can do is sit on the sidelines, shovel in hand, waiting for them to crash.  When they crash, we can only hope they have not hurt others or so marred their life that all the king’s horses and all the king’s men can’t put their life back together again.

March 5, 2014
Not Quoting Quiverfull: Where Does Parenting Responsibility End?
Next Post