Fundraiser To Reunite Father and Daughter 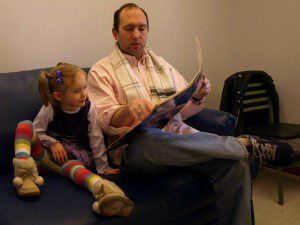 Long time friend of NLQ Lucreza Borgia and her husband have asked NLQ to post their Go Fund Me page,  ask you, our readers, to take a look and consider donating. They are raising funds to bring home Lucreza’s husband’s daughter.

Every story has a beginning, and our story began in May 2010. My daughter’s mother moved from Green Bay, Wis. to northwestern Mo., without my knowledge and took our daughter with her. Unbeknownst to me, while I was searching for my daughter, the state of Missouri took custody of her due to neglect and placed her in a foster home. Since then, I’ve been trying to bring her home.

Missouri has made little effort to reunify my daughter with me. For more than two years, the state did only the bare minimum of updates, and it was not until late 2012 that the Children’s Division offered me a written service agreement. I signed the agreement willingly in an attitude of cooperation, but this was the first of many WSAs that I’d be facing. Each time I completed one requirement, more were added, and finally I realized how tied my hands would be if I continued to remain in Green Bay.

In January 2014, I notified county and court officials that I would be moving to Missouri in an attempt to continue to bond with my daughter. The delay had resulted in her bonding closely with her foster parents, and the court had argued that moving her could be traumatic. Even after the move, however, court officials continued to stall and drag their feet, in spite of the fact that I am making every effort to be the best parent I can be for my child.

My daughter’s foster parents and I were initially adversaries in that they wanted to adopt her and I would not give my consent. Since then, we have cooperated and worked together in the best interests of my daughter. They’ve gone the extra mile by giving me extra visitation and supporting me wholeheartedly.

So why do I still not have custody of my daughter? That’s a question that only Missouri can answer. One common theme that has popped up has been finances. Before I became a father, I’d been largely drifting along through my life, but her birth catalyzed me. I knew that I needed to take steps to be the father she needed. I had never really had my own roots before, but now I had a reason to stretch out my roots so that she could have the stability she needed. I settled into Green Bay and bought my own home. I went back to school so that I could get a good job that would provide her with everything she would need. I received my Bachelor of Science in elementary education in Dec. 2013.

My daughter and I will eventually be reunified, but the legal battle, the move and the costs of two households have left us financially drained. My new wife is maintaining our original home in Green Bay, and I am renting a room in Missouri. Additionally, we have an attorney on retainer and have paid for our WSA requirements out of pocket. There is a light at the end of this long, dark tunnel, but we need your help to reach it. Every donation is greatly appreciated and will help us bring our child home. Thank you

Their page at Go Fund Me

April 17, 2014 So I've Been Spiritually Abused. What Next? - Dealing With Anxiety and Panic
Recent Comments
1 Comment | Leave a Comment
Browse Our Archives
get the latest from
Nonreligious
Sign up for our newsletter
POPULAR AT PATHEOS Nonreligious
1