God’s Not Dead: Thoughts on Christianity and Romance 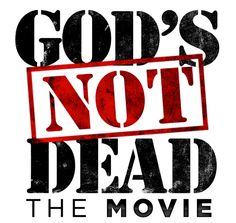 The other day, my Bible study group and I went to see God’s Not Dead.

I enjoyed that the movie was one that made me think. If I have to sit and stare at a screen for longer than 5 minutes, it has to keep my mind engaged. This movie did that, and I enjoyed it.

I’d have to watch the movie a few more times in order to be able to comment on the arguments for and against the existence of God. I need to take notes or something — which is hard to do in a theater, so we won’t get into those arguments.

There is another interesting elements of the movie that I’d like to comment on — you know, the softer, less logical, more emotional part. Those things are (sometimes) easier to understand….

Aside from the main theme of the movie (God’s not dead), the other blaring theme is that of relationships.

Here is a brief synopsis of the relationships in this film:

Reverend Dave and Reverend Jude: According to this movie, if you’re a white, single male pastor, it’s appropriate for you to be close friends, go on vacation and do ministry with a single black male missionary. This relationship was intact at the end of the movie.

Ayisha and her father: Ayisha’s father is a strict Muslim, who puts Ayisha on the streets when he discovers that she has a relationship with Jesus. This is a tragic cultural and spiritual issue, but I’m not sure why it’s part of the plot. It has nothing to do with the main premise of the movie (God’s not dead), and the only thing it proves is that if your family is Muslim and you are a Christian, you will lose everything if they find out.

Willie and Korie Robertson: There isn’t really anything interesting to say about this. This is the only romantic relationship that is intact at the end of the movie.

Josh and Kara: They’ve been together for 6 years, but as soon as Josh does something that Kara doesn’t agree with, she dumps him. How is it possible that they lasted 6 years without having any disagreements? This doesn’t make any sense to me because as one gets older, he/she (should) be growing in maturity, not the other way around. Kara makes a hasty exit about 1/3 of the way through the movie. Josh is left to fight his battles alone. This is (unfortunately) realistic, but very dissatisfying. Josh finds inspiration in his relationship with Reverend Dave and this relationship is intact at the end of the movie.

Amy and the Jerk: They are a non-spiritual, career-oritented couple. And as soon as he finds out that she has cancer, he dumps her. Amy’s cancer diagnosis and new single status lead her to realize (when questioned by the dcTalk dude who is now a Newsboys dude <Ed. Note: Michael Tait>) that she has no hope.

Professor Radisson and Mina: As soon as Mina starts to stand up for herself (and her faith), the relationship implodes. Mina seeks comfort from Reverend Dave.

If you think about this movie from a relational standpoint, you will find that romantic relationships are incompatible with belief in God, unless you are a Robertson, in which case, your redneck awesomeness trumps your belief in God (at least in the romance department) and your marriage is impenetrable. Oh, if we could all be part of the Robertson clan….

As far as platonic relationships go, apparently only single white pastors get to have them. They get to (attempt to) go on vacation with their buddies. They text it up with young male college students. They counsel beautiful (but broken) women. They get to do relationship with all kinds of different people, and in the end, they pray with dying ex-athiest professors and they live happily ever after, knowing they’ve made a difference. But…. they are still (sadly) romantically unattached.

(On another note, Josh develops a friendship at the very end of the movie with the Chinese student from his class. So perhaps they are saying the only appropriate relationships between men are either with clergy or with someone from another culture?)

At any rate, the way relationships are portrayed in this movie is disturbing to me because I’ve noticed a strange trend in most of the Christian circles I’ve been part of, where romance just doesn’t happen. Let me describe briefly what I’ve noticed:

I went to a church for a while where there weren’t very many single men, but the few single men who were there made it clear that they were not “available.” I’m not sure what the reasons for this were — they were so “unavailable” that they wouldn’t even talk to me. And it wasn’t for lack of trying on my part.

I had a situation in this particular church where someone saw me speaking with a single young man twice after church. She asked a mutual male friend to tell this young man to stop talking to me because I “wasn’t ready for a relationship.”

I had a group of friends who decided that I was “boy crazy” (and this was a problem) because I spoke with a male friend from church on the phone twice and mentioned it to them once. Shortly after talking with these friends, the male friend in question took me to Perkins to tell me that he wasn’t interested in me. Um? Ok? Did I say I thought you were? Can’t we be friends? I like having friends…. No? Well, this is awkward….

On a happier note, I got a free meal out of the deal. And I haven’t had a conversation with the person in question since.

I had a male friend during that time that I only got to see or talk to when I was around the girls who accused me of being “boy crazy.” He told me I was hot once. And my entire life imploded. Literally. The girls in question just couldn’t handle it. Including myself. It was a lose-lose situation for me. If I had responded to it, I would have lost my entire life outside of him. I knew that, so I chose to not respond to it. It turned out that I lost it all anyway, because my “friends” couldn’t deal with the idea that my friend found me attractive.

My experience has been that in Christian circles, relationships between single men and single women are not encouraged because it could lead to romance and romance is not compatible with Christian belief.

I’d like to point out that God invented romance, and He said (back in the book of Genesis) that everything He invented is good. When did this change? And how? And why? And how do we get back to the idea that it is good?

Because….. I want to love God. But I want to love a husband and children and friends (of both genders) too. And I think that is the way God wants it to be.

April 16, 2014
Quoting Quiverfull: Shut Up If A Church Leader Sins?
Next Post

Nonreligious
Love is a Luxury?
No Longer Quivering