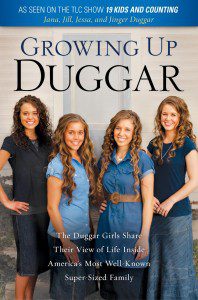 “Lord, we pray that our family can impact the world for You!”

This portion of the Foreword was titled “Racing Against Time” and details how Michelle and Jim Bob prayed the above prayer years before they were anywhere near the public radar screen. They state that the prayer was also humbly asking God to keep all of them on the right track, but in reality there’s not much humble about that type of thinking as it presumes that their way is the only right way, more of a ‘use us, oh God, because we are the most righteous!’

What follows is more humble brag about how humbled the sisters are to have helped reach millions of people for Christ during the television show and how awesome the unique opportunity they’ve been given to reach girls and young women on their own, what a Christ-like way their parents have modeled for them.

Does anyone know a person that has been ‘saved’ or accepted Jesus because of the Duggar show ’19 Kids and Counting’? I think believing that others are saved through their show is a stretch at best. Truthfully, most of the viewers seem to be Evangelicals like the Duggar family, or because of the sort of freakshow aspect of the Duggars, no different than watching “Honey Boo Boo Child” or “Dance Moms”.  Most Americans cannot imagine raising nineteen children at once.

The next section is labeled “Making a Difference in Your Relationships” and starts with talking of all the things the Duggar parents have instilled in the kids to make sure their relationships are strong and close without fractiousness. How to smooth over familial conflict.

Sounds good doesn’t it? Normally I would say keeping peace among siblings is a good thing, but let’s face it, that’s about the only ‘others’ that the Duggar kids have relationships with. They lack any of the essential daily interactions most children get and learn from. How to deal with people that don’t necessarily like you, people different than you, resolving conflicts with those that don’t share your views. You learn from those relationships with people who aren’t your relatives. This is another way the Duggar way of life has ill-prepared their children for adult life.

“And then there’s the really hot topic we’re asked about a lot: boys. That’s a relationship that is frequently considered by just about every girl we know—including the four oldest Duggar girls! As we write this, we’re waiting for the young man God has for us—if marriage is in the future He plans for us. Meanwhile, we’ve thought a lot about what we want in a future husband and how we anticipate courtship will happen . As you might expect, it’s pretty different from the way many couples interact these days. For one thing, it may surprise you to know it doesn’t involve typical dating, but what we call courtship— or ‘dating with a purpose’ “

Ah, and just like that it becomes obvious that the book and all the courtship and engagement news emerging about the Duggars might just be Jim Bob Duggar’s newest scheme to keep the money flowing and the interest in his family’s show alive now that Michelle’s quiver has been devoid of new life for something like several years now. Jill is engaged as of this writing and Jessa is courting, both to young men Daddy Duggar hand picked as worthy.

“We hope this book will inspire you to let the love of God and His Son Jesus Christ empower you to make a difference through the relationships that fill your own life.”

Pretty words. We’ll see where this all leads in further chapters.