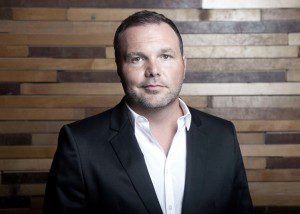 Calvinist super-star Mark Driscoll is the iconic figure at the heart of a church empire that spans five states and fifteen locations. Founder of the Mars Hill franchise, Driscoll boasts a flock of 14,000 members plus hundreds of thousands of listeners and readers via web and print media, including, until last month, 466,000 followers on Twitter alone.

While fans and critics heatedly debate whether Mar’s Hill is a church or a cult, there can be little doubt that the brand relies heavily on a cult of personality. Every Sunday Driscoll appears on stage not only in person at his primary location but on life-sized screens at others. He opens at times with a rock band that one secular detractor confessed was “the best indie music I’ve heard all year” and that Driscoll himself has said will “melt your face off.”

Driscoll has a knack for getting attention and, in particular, for using controversy to spin up his visibility. During the second Obama inauguration, he tweeted, “Praying 4 our president who today will place his hands on a Bible he does not believe to take an oath to a God he likely does not know.”

Though Driscoll rarely dabbles directly in politics—his followers know implicitly where he stands—his comments about queers and, in particular, women have been a source of  ire for many. When Ted Haggard, president of the National Association of Evangelicals was  caught with meth and a male prostitute, Driscoll  pointed the finger at Haggard’s wife: “It is not uncommon to meet pastors’ wives who really let themselves go; they sometimes feel that because their husband is a pastor, he is therefore trapped into fidelity, which gives them cause for laziness.” Outrage on the part of feminists merely stoked Driscoll’s fire.

Another time, he set the blogosphere abuzz by recounting a self-congratulatory  story in which he advised a woman in his congregation that she should apologize to her husband for the sin of not “serving” him, and then should get down on her knees and give him a blow job. By Driscoll’s account this excellent advice caused the husband to start attending church.

In Mars Hill theology, female members are viewed through the lens of  complementarianism, a theological position that prescribes separate roles for women and men including  male headship. A woman being advised to get down on her knees and give her husband a blow job represents just one of a spectrum of submissive behaviors touted for females, who are encouraged to find their meaning in the traditional roles of wife and mother. The virginity of women is prized, and  by some reports Driscoll’s late discovery and fury that his wife had sex with another male as a teenager became  bizarrely significant in their relationship and in the life of the church even though he himself was  not a virgin when he married.

Sex talk fused with God talk, or titillation more broadly, is a  key component of the Driscoll brand. Driscoll’s stage persona at times has included  tight jeans and an extra button open on the shirt. He once greeted a crowd at the University of Washington by reporting that he had gotten his genitals caught in his zipper before the show and that he would be stopping on time because his wife was at home waiting for him with a cream pie. On a more serious note, Driscoll has been a key advocate for candid conversations about sexuality among conservative Christians—though any actual “action” is reserved for married straight couples with the man—metaphorically at least—on top.

For years, while Driscoll’s detractors have railed behind closed doors or publically—with one critic even launching a website called  DriscollWatch to address his internecine rants against Catholicism—Driscoll has maintained a bold face forward, confident that he is God’s emissary on a divinely appointed mission. His loyal following has backed him, and, thanks probably to Google Alerts, any criticism online triggers a flurry of defense as soon as it goes live.

‘<a href=”http://amzn.to/bAB5He”>Quiverfull: Inside the Christian Patriarchy Movement</a>‘ by Kathryn Joyce

April 2, 2014 Quoting Quiverfull: What is Wrong With Self-Acceptance?
Recent Comments
4 Comments | Leave a Comment
Browse Our Archives
get the latest from
Nonreligious
Sign up for our newsletter
POPULAR AT PATHEOS Nonreligious
1