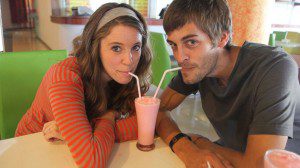 Make way for a Duggar-sized wedding.

The famously expansive Duggar clan, stars of TLC’s hit reality show 19 Kids & Counting, will be adding a new son-in-law to their crew in the next few months.

Jill Duggar, 22, who is studying to be a midwife, recently revealed her courtship with Derick Dillard, 25, an accountant in Rogers, Ark. Now, she tells PEOPLE exclusively, the two are engaged to be married.

“I am so happy,” says Jill. “Our story is so very unique. The first time we talked, he was in Japan, we met in Nepal, he spent time in India and Israel and then came back to Arkansas where he met my family. We have a very international story even though we live so close.”

Jill and her younger sister Jessa, 21 – who is in a courtship with Ben Seewald, 18, of Hot Spring, Ark. – have shared the differences between dating and courting with millions of viewers. The girls, along with their sisters Jana, 24, and Jinger, 20, also explain those differences in their new book Growing Up Duggar, released earlier this year. Once the couple became engaged, they agreed that they would hold hands – a physical contact they decided to hold off until engagement. They will share their first kiss on their wedding day.

“I feel like I’m dreaming,” Derick tells PEOPLE of his engagement to Jill. “It was great to grab her hand for the first time.”

Nonreligious
Open Thread COVID 19 - What You Need...
No Longer Quivering