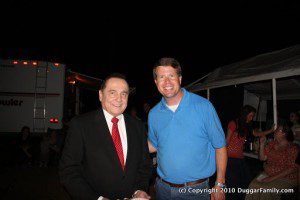 Apparently ATI’s attempt to paper over the allegations of sexual abuse by former leader Bill Gothard is to get the Bates and the Duggars to speak at their conferences.

Nonetheless, it’s apparent that many IBLP and ATI followers — including the Duggars — are still committed to the programs. In fact, according to the newly released “2014 Family Conference Guide” for ATI and IBLP followers, Jim Bob Duggar and Michelle Duggar are slated to speak at three upcoming national conferences.

The program also indicates current ATI and IBLP leaders (including Gil Bates from United Bates of America) hope to steer attention away from Gothard — calling the programs’ situation “a transition.” As the introduction reads, “How blessed we are by the opportunity this conference provides for us to bring everything back to the Word of God.”

Without any direct mention to Gothard or the controversy (either in the program or other literature recently released), it’s unclear whether IBLP/ATI leaders are actually committed to making changes to prevent similar instances of sexual harassment from happening in the future. If fundamental changes are not made, the women of Recovering Grace worry situations may worsen for the girls at risk.

“It seems unbelievable that a subculture that so emphasizes sexual propriety, denial, and protection would conceal so much sexual misconduct and abuse, but passive facilitation of abuse is endemic to the system. Sexual abusers are attracted to and protected by the system.”

Read the rest of the article at Stargasm

April 17, 2014
So I've Been Spiritually Abused. What Next? - Dealing With Anxiety and Panic
Next Post

April 18, 2014 Quoting Quiverfull: Shy Children Must Be Trained Out Of It?
Recent Comments
9 Comments | Leave a Comment
Browse Our Archives
Follow Us!