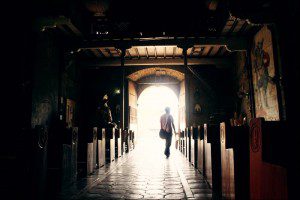 In the weeks following that meeting with the board, there were many communications (mostly via email) which just deepened the wounding. As dramatic as it might sound, I felt like I was fighting for my very life. I begged for someone to listen to me, to hear what had been going on and help me find a way out of my pain. By this time, elder M had given up hope and resigned his membership. I desperately wanted to believe there was a better way to go, that people who claimed to follow Christ should be able to work this out together, that we didn’t have to stay trapped in an endless repetition of history!

I really tried to do what I was told – to just “forgive and move on”. I put my trust in these people and tried to accept that it was somehow my fault, that there was something wrong with me. But it was tearing me apart. I was screaming out that I had been bullied and abused by J and yet I was being told that I should submit to his “godly authority”. And I just couldn’t do it! So I endured one last bullying session where board member L delivered the unanimous ‘advice’ of the board to either submit or “consider my position”. That night I resigned.

But, of course, that didn’t actually deal with any of the problems. Apparently, I was supposed to just smile and pretend nothing was wrong but I couldn’t ignore the elephant in the room (especially when it was emitting such a foul stench!). Eventually, I wrote to the elders to express my distress at being told, effectively, to sit down and shut up. Their response was to “relieve” me from the preaching roster and from my position as prophetic ministry lead. I really don’t think they could see the irony in that – I objected to being silenced, and they responded by silencing me further!

And so, we limped to church for a few more months, desperately clinging to the hope that someone, somehow would be able to ‘do something’ about the whole sorry mess. During that time, I was treated like a pariah. My own brother disowned me, his wife screamed at me in the school car park when I tried to talk to her, Board member D felt ‘led by God’ to preach for 3 weeks running about ‘Jezebels and False Prophets’, my personal conversations at church were monitored and I had all sorts of false accusations flung at me (apparently I was “murmuring against God’s anointed”). During this time, there were two new elders appointed who both just happened to be close friends with elder R, but the final straw for us was when the elders released a document re-writing history and dismissing any concerns that we had tried to raise. It was a bureaucratic masterpiece, but a relationship killer.

And so we left.

April 17, 2014 Fundraiser To Reunite Father and Daughter
Recent Comments
0 | Leave a Comment
"This is late, partly bc of my preoccupation and partly bc I'd been slowly reading ..."
Jennifer Serena’s Serenity – Luxury Hotel, Birthing ..."
"Thank you for your commitment to truth and love, Suzanne. Best wishes to you and ..."
Meredith Anne Not a Goodbye, More of a ..."
"For what it's worth, I've learned a lot from you about a Very Creepy movement ..."
Gwen Pryce Not a Goodbye, More of a ..."
"Unfortunately, this kind of satire (if it even is satire) is what gives Christianity the ..."
Emily Is Biblical Gender Roles a Big ..."
Browse Our Archives
get the latest from
Nonreligious
Sign up for our newsletter
POPULAR AT PATHEOS Nonreligious
1