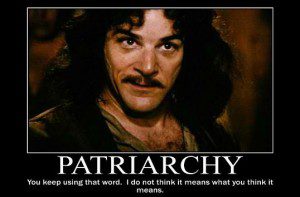 by Kevin Swanson cross posted from Generations With Vision

I am not a patriarchal-ist.

2. Actually, the Bible calls the husband (me), the “head” as Christ is head of the church (Eph. 5:23). This is clear biblical language, and for those still out there who believe the Bible, it’s okay to use biblical language.

The modern expressions of both patriarchy and feminism (in the form of individualism) discount the biblical idea of corporeality in the family. Husband and wife are connected in a special oneness in the biblical metaphysic, and this idea has been anathematized by the American religion.

Those who have heard me speak know that I prefer using clear biblical terms such as “help meet,” or “oikos-despoteo,” or “covenant head” in these discussions, because that is the clear biblical language relating to roles. For a reasonably balanced statement on male and female roles, reference http://cbmw.org/core-beliefs. For my July 7th, 2010 interview with Randy Stinson, click here.

3. I don’t like movements that narrow applications and tout highly niched agendas. However I still cotton to any true Spirit-filled movement of God where there is a revival of biblical principles like fearing God and loving God with heart, soul, mind, and strength (and sincerely endeavoring to learn and apply the commandments of God).

4. It also seems that the word “Patriarchy” is used as a handy pejorative for anybody who says they believe Ephesians 5 to be ethically normative. Based on my limited observations, the word has become another suitable synonym for “*****in’ Idiot” – helpful for those who are working to expand their vocabulary while decrying our fundamental view of epistemology, metaphysics, and ethics. Protesting  those who are incorrigibly attached to hollow ad hominems, straw man manufacturing, and guilt-by-association arguments is supremely useless.

5. In the present social context, the word “Patriarchy” has come to describe the angry, licentious, porn-habituated, abusive, control-freak dad. And if there are sufficient numbers of these twice dead trees, I guess there should be a word to denote the phenomenon.   Where love and honor break down between the generations, there is no telling what dysfunctionalities will come about.

Read the rest, including a list of things women do that are considered ‘sins’ in most Biblical Patriarchal circles at Generations With Vision.