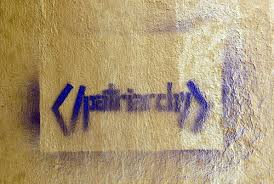 In our day, there is a great battle over how words are defined. This happens often in the political arena where the words “liberal” and “conservative” seem to take on a different meaning depending on who is using them.

And it’s not just politics; many moral and theological terms have either been morphed or hijacked. With or without an agenda, many words are twisted by the behavior of the one embracing a term, making things even more confusing.

Words like “gay,” “partner,” and “tolerance,” communicate something very different than they did even 50 years ago. Even words like “dominion” or “kingdom” are pejoratives to some, used and defined only by the critic tossing them around.

And, so it is with the “P” word; the word we know as patriarchy. In our day, patriarchy is quickly becoming a pejorative. It has come to mean, “selfish, overbearing tyrant who seeks to dominate and suppress women and children.” And, let’s be clear, there are those who embrace that term and fit the bill. They have behaved as if the world revolves around them and that women and children exist only to serve them.

However, the true definition of the term patriarchy does not refer to a position of dominance, rather it refers to a position of servanthood. The word comes from two Greek words: patria, which means father, and arche, which means to rule. In other words, patriarchy refers to a government where the father is responsible before God for the nurture and care of those placed under his charge. Serious stuff.

April 3, 2014 Part 2: Alarm Bells Start To Ring
Recent Comments
33 Comments | Leave a Comment
"This is late, partly bc of my preoccupation and partly bc I'd been slowly reading ..."
Jennifer Serena’s Serenity – Luxury Hotel, Birthing ..."
"Thank you for your commitment to truth and love, Suzanne. Best wishes to you and ..."
Meredith Anne Not a Goodbye, More of a ..."
"For what it's worth, I've learned a lot from you about a Very Creepy movement ..."
Gwen Pryce Not a Goodbye, More of a ..."
"Unfortunately, this kind of satire (if it even is satire) is what gives Christianity the ..."
Emily Is Biblical Gender Roles a Big ..."
Browse Our Archives
get the latest from
Nonreligious
Sign up for our newsletter
POPULAR AT PATHEOS Nonreligious
1