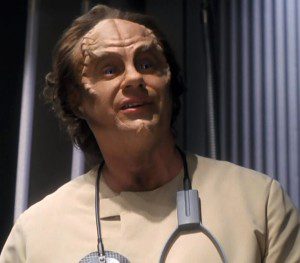 I’m a Star Trek fan, and yes– it’s related. I grew up watching Star Trek loyally, and I’m pretty sure Captain Kathryn Janeway is one of the few reasons why I managed to be somewhat normal. So, when Enterprise began airing, I watched every single episode, and Phlox, a Denobulan doctor, quickly became one of my favorites. “The Breach” is one of the few episodes dedicated to his character, and it explores an ethical dilemma: he has been ordered by the captain to treat a patient even though this patient has repeatedly refused to be treated. To the human captain, it’s a simple matter of saving a life, but to Phlox, it was far more complicated.

As I was watching the episode, I realized there was something rather awesome about Denobulan culture: it is based entirely on consent. To treat a patient without his or her consent would violate everything Phlox believed about ethics and morality. I turned to my partner and announced that we were moving to Denobula, physics and reality be damned.

If there is a single idea that I desperately want to communicate to every single last person on the planet, it’s this one: Consent.

Western culture understands consent inside a few limited contexts– but even in most of those contexts, consent can be overruled if the circumstances are right. One of the areas where consent seems to completely fly out the window is when we’re talking about The Sex, although that is very, very slowly improving. However, in environments that encourage Purity in the form of Virginity, consent . . . just doesn’t show up. The only time I’ve heard consent mentioned has been to mock the very idea– “the world says that sex is fine as long as it’s “consensual”– but we know better than that, don’t we?” complete with obligatory scare quotes around “consensual.”

I’ve been struggling, trying to figure out why it seems so difficult for evangelical purity advocates to talk about consent, why the idea is mocked when it’s presented, and why no one seems to care about consent when it seems, at least to me, absolutely foundational when it comes to sexual interactions. Why does it seem to be more typical for those who teach purity to advocate for the opposite of consent? Why do some of them actively pursue the idea that marital rape is impossible– that being married is automatic consent? Or, if they’re not intentionally teaching against consent, why does it never seem to get mentioned?

Well, and I’m positive I’m not the first person to think of this, but I had an epiphany this morning.

They don’t teach consent because teaching consent would undermine one of their basic assumptions about people. Namely, the assumption that every single last person– most especially men, but also women– are basically nymphos who are straining at their leashes every single second of every single day and if you let that sex-crazed beast out for even just a moment then BAM it’s all over and you’re not a virgin anymore and that’s horrible because now you’re a half-eaten candybar or a cup full of spit.

This is why the “how far is too far?” question is almost unanimously answered with “you can’t do anything that might get your motor going, because the second you’re aroused– at all– there’s virtually nothing you’ll be able to do to stop yourself from having sex.”

To them, consent is always guaranteed. There’s no such thing as a person who would say no to an opportunity to have sex. Ever. The only thing you have to do to give consent is be alive.

If you start walking around teaching the idea that some people may not want to have sex with you and you need to ask first, it completely undoes everything they’re teaching about human sexuality. If you remove the ominous boogeyman of your inner sexual demons, then suddenly it might be ok to start exploring your pants-feelings. Because you can decide whether or not you want to do . . . well, whatever you want to do. Or not.

And it’s the “or not” part that would render most of what they teach almost completely useless. If people are capable of saying no, I don’t want to have sex with you, then teaching people that they cannot ever be alone with someone is sort of pointless. So are all the ridiculous conversations about hand holding and kissing and (God forbid) “heavy petting.”

Purity culture actually strips away empowerment, and agency, and autonomy. And the most horrifying thing about this understanding of human sexuality is that it makes rape non-existent. No one can be raped because we all want it all of the time.

April 9, 2014
Not Quoting Quiverfull: What is a Cult? Church of Wells Edition
Next Post

April 9, 2014 News: Jill Duggar Engaged
Recent Comments
15 Comments | Leave a Comment
Browse Our Archives
get the latest from
Nonreligious
Sign up for our newsletter
POPULAR AT PATHEOS Nonreligious
1