Jezebel.Com has written a horribly funny but thought-provoking  piece on the changes through the years in the Duggar family along with how they are answering the criticisms for following Bill “Grabby Hands” Gothard – How are the Duggars dealing with the Gothard Sex Scandal?

So, what follows may be the greatest Duggar based conspiracy theory that you’ve read this month. Ok, it’s not that great but it’s a theory.

Now, it is well known among Gothard’s that the kind of crunchy, curly home-permed hair favored by Michelle and the clan in the early season is based on preferences of Gothard, who loved long, wavy womanly hair and damn the woman who does not possess sacred this crown. Now it may be a small thing but witness the evolution of the fashion of the Duggars.

First here they are in their pinafore wearing glory in their first special, 14 Kids and Pregnant filmed in 2003:

This was back in the day where they wore similar clothes. They had matching perms. They refused to show their knees. Michelle’s rebellious spirit and her days as a bikini wearing, lawn mowing cheerleader were thoroughly crushed. They were model Gothard citizens. They fought against late term abortion. They stocked canned foods like a paramilitary group. They sang off-tune renditions of Amazing Grace (okay, well they still do that).

And now look at this picture: 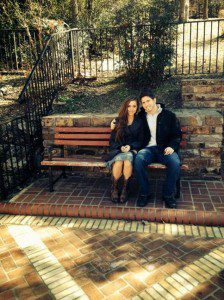 This is Jessa Duggar and the guy she can barely stand, her soon-to-be fiancee (Jim-Bob-willing), Ben Seewald. You notice a few things? Jessa,who has become the most Godly Breck girl in creation has dispensed with the curly Gothard hair for a straighter and more stylish look. And she is not the only Duggar who has exited the home perm train. But it’s more than just the hair. Jess is showing knee. KNEE. What’s next? Darwinism? Drinking? VOTING DEMOCRAT? I mean, shit, Anna Duggar is already eating Tilapia, it’s a pretty slippery slope. And remember, they adhere to a religion that emphasizes womanly modesty above all else because they blame women FOR EVERYTHING. Because men are sinful and all their superior brain power can’t help them decide to keep it in their pants. So Jessa slyly challenging those restrictions is a big deal. And her make-up is always on point. She is my idol. She’s so smirky.

And if you don’t believe that showing the knee is scandalous, watch some of the earlier seasons. There is a scene where Jim-Bob was worried that Jordyn’s dress was too short. Now Jordyn was THREE years old at the time. Seriously. And the dress fit— she hadn’t outgrown it clearly, but it showed too much leg for a three year old. (And don’t forget, even young children are seen as objects of sin if they aren’t sufficiently modest) Another episode had Michelle Duggar waterskiing in her modesty bathing suit and when her knees were showing, she had the producers put a black bar over them because they were exposing something that was private. Knees are for Jim Bob only, not for the lascivious knees fetishizing public. However, all that has changed. Between Michelle’s recent foray’s with slingshotting and Jessa’s wild knee exposure, anything goes.

May 28, 2014
Preparing To Be A Help Meet - Background Information
Next Post

May 29, 2014 Quoting Quiverfull: "Making" Yourself Pleasant?
Recent Comments
5 Comments | Leave a Comment
"This is late, partly bc of my preoccupation and partly bc I'd been slowly reading ..."
Jennifer Serena’s Serenity – Luxury Hotel, Birthing ..."
"Thank you for your commitment to truth and love, Suzanne. Best wishes to you and ..."
Meredith Anne Not a Goodbye, More of a ..."
"For your sake, I am so glad you will no longer be editing and managing ..."
Lana Not a Goodbye, More of a ..."
"For what it's worth, I've learned a lot from you about a Very Creepy movement ..."
Griff Pryce Not a Goodbye, More of a ..."
Browse Our Archives
get the latest from
Nonreligious
Sign up for our newsletter
POPULAR AT PATHEOS Nonreligious
1