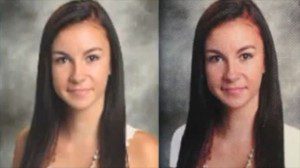 Editorial note: This has been all over the media the last few days. Apparently  Good Christians/Mormons ™ decided that tank tops and bra straps were the big No-No and decided to keep Utah boys pure of lustful thoughts by photoshopping (badly) sleeves onto shirts covering shoulders and bra straps. More slut-shaming in this modesty standard that wasn’t even applied consistently.

Administrators claim the students knew about the dress code’s modesty requirements, and also claim that students were warned that their pictures might be edited.

Taking a defiant stance, the Wasatch County Superintendent would only admit the school erred in not applying the same rules to each student.

“We only apologize in the sense that we want to be more consistent with what we’re trying to do in that sense we can help kids better prepare for their future by knowing how to dress appropriately for things,” said Terry E. Shoemaker, who is the superintendent of schools for the Wasatch County School District.

However, critics find the unauthorized photoshopping of the girls yearbook photos deeply disturbing, and reflect the power of the notorious Mormon modesty police in the state of Utah.

May 29, 2014
So I've Been Spiritually Abused, What Next?: The Narcissistic Pastor - How to Recognize a Spiritual Abuser
Next Post

May 30, 2014 Quoting Quiverfull: Pot Meet Kettle - Modesty Standards and Religion?
Recent Comments
10 Comments | Leave a Comment
Browse Our Archives
get the latest from
Nonreligious
Sign up for our newsletter
POPULAR AT PATHEOS Nonreligious
1