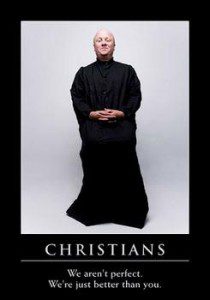 However, there is a vocal minority of Atheists (I term them Fundamentalist Atheists) that seek to eradicate all religion, and these are the focus of this article.

It doesn’t take long reading Fundamentalist Atheist’s thoughts to find that they believe that Christians are the American version of the Taliban.  They trot out the ideas that Christians are behind unequal rights for gays and telling women what to do with their bodies, and compare that to the Taliban telling women that they are of no worth and that they must veil themselves from head to toe.

What they miss is the fact that on a larger scale, they are actually America’s Taliban.

The Fundamentalist Atheists have come upon a land that tolerates their absurd belief that there is no higher power, and they have decided to make war with the foundations of that society.  They forced the schools to remove Christian teachings, readings and moral instruction under the guise of equality.  Correct me if I’m wrong, but Jewish, Muslim and other religions, though they may not have agreed with such teachings, were not behind the movement to take God out of school.

But their most Taliban like act is how they have behaved toward the ceremonial religion of the nation.  While they may have screamed and howled over the fact that the Middle Eastern Taliban destroyed sculptures that dated back thousands of years as they attempted to purify their country of “false religion”, they do the very same thing here, striking out against postings of the Ten Commandments, Crosses, and the Pledge of Allegiance.

Indeed, cultural heritage means nothing to the Fundamentalist Atheist, as he attempts to rewrite history and the Founders to make Atheists and Agnostics out of them for the purposes of thrusting their own beliefs on the people.  Many will state that “many of the Founders were Deists” which is to equate them with Atheism, when the reality is quite different.

Read the entire posting at Minthegap

May 24, 2014
Quoting Quiverfull: When You Graduate You've Accomplished Nothing?
Next Post