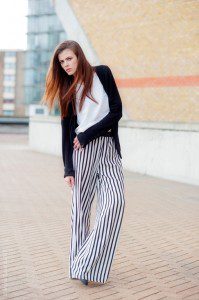 Women are so easily caught up in “what everyone is doing” or what is available in the shops and what is promoted in magazines and TV. They don’t think about how their body is portrayed and what it causes in men – the stumbling block it becomes for men. Women condemn lust in a man when they see it but somehow they don’t make the connection between the condemnable lust and their own clothes that they are wearing. Not realizing this makes them stand guilty before God as a stumbling stone because of the lust they caused.

This should not be too quickly excused by women and ladies. Yes, the lust in a pervert is inexcusable and they have a serious problem. But the large majority of decent men are influenced in different degrees by what they see in you as a woman. And they may hide the feelings that it naturally provokes and even be ashamed of it. This causes serious dilemma for them in their purity and the battle they fight is a serious and deadly one. That may very well leave them impure before God and short of His holiness because of what you, a woman, placed before them in the form of a stumbling block and the same will also leave you blamed by God for your uncareful and unsympathetic, reckless and to a large extent plain carnal behavior and justification of it. A large majority of women may very well stand before God one day with a sea of men around her whom she caused to stumble by modeling her body in a sexy form in front of them. She may use the excuse that they should’ve had self control, maturity, etc but the fact is she didn’t have it herself and was far too deliberately ignorant. God says if a man even so much as looks at a woman with lust in his heart he is guilty of adultery. Now, if you don’t have the proper godly desire to be totally blameless in your dress and conduct how do you know how many, many times your careless and uncareful (sic-made up word) attitude makes decent men stumble. Oh, how are you not accountable before God for all the men that you know and live among whether they are brothers of the faith or still in the world? How do you not stand accountable before God? Even unto those who will see you only once or twice in their life. How many decent men can cause to stumble in a life time? How much blood can you gather on your hands and keep gathering it because of shallow excuses to dress the way you want, and not be sensitive towards those around you. Whether it be men and how they perceive you and how you influence them. Or whether it be the example you set for other women and girls. If you be a true Christian and are living “on the edge” how will you not cause justification in the lives of other very pretty women and young ladies causing them to reason, “If you who seems to be a stronger Christian can do it, then surely we can too”. Oh, how much blood can you spill? Because of your simple refusal to be blameless and to dress yourself as close to the cross as you can far away from the edge of the cliff. Too often Christians live as close to the edge of the cliff as they can rather than as close to the cross as they can. This is the life of blamelessness by which you will be blameless before God in as far as you were a temptress and justifier of edgy lewdness to other women.

Read the entire wordy article at Go Tell My People

June 5, 2014 Preparing To Be A Help Meet: God Needs Our Prayers - Part 1
Recent Comments
36 Comments | Leave a Comment
Browse Our Archives
get the latest from
Nonreligious
Sign up for our newsletter
POPULAR AT PATHEOS Nonreligious
1