Preparing To Be A Help Meet: The Priest Part 3

Preparing To Be A Help Meet: The Priest Part 3 July 27, 2014 Suzanne Titkemeyer 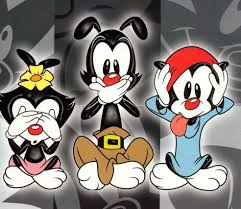 In the next installment on Priestly Men, Debi paints picture of what life for the wife of a Priestly Man is like with a huge interruption by a Visionary Man on a side note. “The key is to know you man.  In what image has God created him?  You, as his help meet, will need to  learn to conform to your man.  God’s Word says, in Hebrews 13:8,  “Jesus Christ the same yesterday, today and forever.”
On the 90’s TV show Animanics, there was a reoccurring segment called “The Wheel of Morality”.  The characters would pull out a giant game-show wheel, spin it and read a canned moral that printed off.

I’m pretty sure Debi uses the same wheel for her Bible quotes.  I have no idea why, how or by what rationale Debi (or Mike) decided that Hebrews 13:8 supported the preceding idea.“This is going to sound different, but many of these “nice” men prefer their wives to show some initiative.  A Kingly man tells you what to do and how to serve him, and a Prophet wants you to do what he is doing.  But if you marry a Priestly Man, he will want you to walk beside him, yet grow in your won right before God and man.”

Actually, the vast majority of men and women want their spouses to grow while walking besides them.  That’s a healthy marriage.“Priestly men like their wives to be involved in business.  He will be proud of your accomplishments.  He will want you to use your natural skills, abilities, and drives.  Your achievements will be an honor to him, but if you are lazy or slothful it will greatly discourage him.”
In other words, women can receive advanced education and a career!  Sweet!
The sentence about lazy/slothful would better be addressed to Visionary men in my opinion.
“All men dislike for their wives to waste time or money. Silly behavior weighs heavily on a young husband, robbing him of his pride and pleasure in his new wife. A Priestly Man really values a resourceful, hardworking woman who shows dignity and honor.  It is very important to the Priestly Man that his wife be self-sufficient in all the tasks of daily living.  If you marry a Priest you will be urged to explore your own creative genius.”

Notice how Debi makes a new wife sound like a new toy for a small child.  “Be careful or you’ll mess the paint up!”
On a unrelated note, most people like spouses to be self-sufficient in the daily tasks of living barring an accident or disability.
“[Note from Visionary Man:] Men can be a little weird about money.  For many men there is a direct link between their productivity and their self-worth.  Money, with its numerical value, is a concrete measure of productivity.  This is why, when a girlfriend or wife flippantly spends her guy’s hard-earned money, it can be hard on the fellow.  He’ll feel cheated and belittled that you hold such small regard for the result of his effort and time.  Whenever you buy something, it shows the man that you equate that item to that much of his life (which is his time), and he may mentally calculate the exact number of hours he had to work to cover that superfluous item.)”Why is the Visionary Man popping up in the middle of the Priestly chapter?   The more ‘insights’ I read from Visionary Man the more I think he needs to seek therapy quickly.

I don’t know why a girlfriend would be spending a guy’s money, so I’m going to focus on a wife.  When you marry, barring a pre-nup, cash assets belong to both spouses.  There are lots and lots of systems that couples use to manage household finances.  The one that the Visionary Man describes is extremely toxic.  In VisionaryWorld, the man works for cash and gets to look over his wife’s shoulder when she makes purchases.  If he doesn’t like what she’s buying (ie “flippantly spends”), he gets to pitch a fit.
Your wife is a partner, not a dependent child.
Let’s say the wife is staying at home and running the house without children around.  In my area, house-cleaners make between $10-15 per hour.  Hiring a chef is around $20 per hour.  I have no idea what a personal shopper would cost but I can’t imagine it’s less than $10 per hour.  If the husband is that money obsessed,   he needs to look at how much his wife is saving by running the household before climbing up on to his high horse.

“Start today learning how to pay bills, make appointments, and entertain guests with a competence that will bring satisfaction to your husband-to-be.”
Well, that will take about 5 minutes total.  None of those things are hard.
Your hobbies should be creative and useful so that you learn things that will help you teach your children. A great hobby for a future home-schooling mom would be a college education in elementary education or secondary education in math and science!  Go for it, ladies!
If you are busy and productive now, so you will be when you are married.  Your skills and achievements will be your husband’s resume.

I don’t think Debi/Mike know what a resume is……..When those on the outside take note of your wisdom and competence, it will reflect well upon your husband.
Or make people wonder how a nice woman like you ended up with a lazy, slothful lunatic.  Just saying.
At the end of the day, your Priestly husband will enjoy weighing what he has accomplished with what you have accomplished and will rejoice in the value of having a worthy partner in the grace of life.
The sad part of this quote is that this is the first time Debi has admitted that spouses should appreciate their partner.

AntiPearl: We will never have true civilization until we have learned to recognize the rights of others.
Will Rogers

July 27, 2014 News: What Does Fundamentalist Evangelical Christianity Look Like in Politics?
Recent Comments
9 Comments | Leave a Comment
Browse Our Archives
get the latest from
Nonreligious
Sign up for our newsletter
POPULAR AT PATHEOS Nonreligious
1