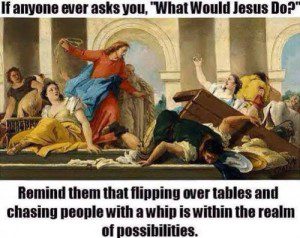 One of the ongoing themes throughout the Duggar girls book is that anger is dangerous and to be avoided at all costs.  Keep in control even when starting to experience anger (which they seem to think no one has the right to actually be angry) is paramount. They talk about Michelle whispering when getting angry and how you should make sure any guy you’re in courtship with doesn’t get angry easy.

Makes me wonder what they thought of Jesus throwing the money changers out of the temple. Did they think Jesus was politely tiptoeing around saying, ‘Sorry, old chap, but you can’t do that here. sorry I’m knocking your stuff around. Have a nice day!’

I’ve seen the effects of out-of-control anger first-hand. The number one painful thing girls talk about at the Journey to the Heart girls retreat–a ministry I am involved with—(A Bill Gothard ITA-branded retreat) and almost always through tears and heartache, is anger in the home.

Anger can cause lifelong damage to anyone, but especially to children. It can break apart families, destroy marriages, kill friendships, and even end careers. Dad has told us many stories of people who have gotten angry and lost control of themselves, as well as the consequences that followed. One employee at the grocery store were Dad used to work got mad at the boss for getting on to him, so he punched the boss with his fist! As you could guess, that was the end of his job.

Another young man my dad knew got angry with another driver in a road rage incident. They both ended up stopping at the side of the road and yelling at each other. One young many got so angry that he put his car in gear and rammed into the other guy. That day both young men’s lives were changed forever; one died, and the other ended up going to prison.

Notice that their two examples of anger went right to the physical violent extremes? Interesting.