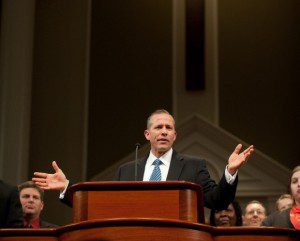 You’d think after a conviction based upon his own confession that disgraced Independent Fundamentalist Baptist pastor Jack Schaap was cut his losses, do his time and move on. Not so. He is asking again to have his sentence vacated.

A little history here for those of you here who don’t know who Schaap is and what he did. Jack Schaap was head of Hyles-Anderson College and head pastor of First Baptist Church of Hammond, Indiana, the big cheese, the head kahuna, ringmaster of that circus that is the IFB.

Schaap started counseling a teenaged girl who had been sexually abused and started having an affair with this girl. She was under the age of consent. He admits this. Then he started taking her across state lines, getting other church members to transport her, just so he could continue to have sex with her. One of his deacon found Schaap’s cell phone on a pew at First Baptist after a Sunday service and saw the photos and explicit texts between Schaap and his teenaged victim. If I recall correctly the church sat on this information for at least a week while confronting the pastor. Eventually the local police and the FBI got involved and Schaap’s attorney’s told him to plead guilty and he’d receive a light sentence of no more than ten years. The judge decided the sentencing request was too little and gave him two additional years for a total of twelve years, not an unreasonable sentence length for his crimes.

In the meantime Schaap decided his lawyers had mislead him and that the victim’s prior sexual history should have been introduced as a mitigating circumstance in his case. He doesn’t feel he should have to do the time because he’s a pastor and the young girl had some previous sexual experience.  A judge reviewed his request and said it did not have merit. Now he has new claims along the lines of the old claim, he wants them to vacate his sentence because he didn’t have the same knowledge as a lawyer and, disgustingly enough, the girl has prior sexual knowledge.

The new document, filed Friday in the U.S. District Court in Hammond in response to the government, argues that Schaap has no legal background and thus shouldn’t be expected to understand what terms like “maximum guideline sentence” actually mean.

“Petitioner did not attend law school and does not have an extensive history of involvement with the criminal history system,” the filing says.

Schaap also continues to argue that evidence about his victim’s sexual past is relevant to his sentence because it makes him less culpable. The document refers to advances the victim, who was 16 when their relationship began, allegedly made on him. Federal attorneys have argued the victim was in an emotional place at the time and had been told by other adults to place her complete trust in Schaap, who at the time held several positions of authority, as her pastor, principal and counselor, over her.

This is one of the best examples in society of the Christian fundamentalist patriarchal male and how he believes he is ‘special’ and somehow exempt from all natural consequences of his own actions because ‘Bible’.  These powerful weaklings refuse to take any blame or responsibility for their actions, always shifting the blame to the women in their lives. If the feds were to vacate Schaap’s sentence, send him home to First Baptist and absolve him of any guilt it’s likely that Schaap would go right back to his same actions.

Do we really want any more young female victims of this guy? I suspect that there are others who haven’t come forward yet. I have heard on another site that Jack Schaap had the tendency to just show up in the middle of the night at the female dorms of Hyles-Anderson College. Creepy is as creepy does.

Too bad they can’t adjust his sentence upwards every time he attempts to blame the underaged victim for his doings.  What an arrogant guy!

August 5, 2014
Quoting Quiverfull: Gynos are all Perverts?
Next Post

August 5, 2014 Preparing To Be A Help Meet: The King Part 2
Recent Comments
16 Comments | Leave a Comment
Browse Our Archives
get the latest from
No Longer Quivering
Sign up for our newsletter
POPULAR AT PATHEOS Nonreligious
1