Not Quoting Quiverfull: Retracting Harmful Words Towards Gays in Church 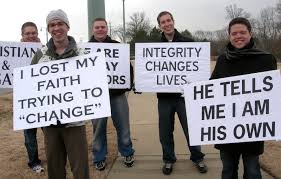 Short excerpt from the letter:

Looking back, we were just believing (and sometimes teaching) what we had been taught— that our identity needed mending. We grew up being told that being LGBT was disordered, sick, mentally ill, sinful, and displeasing to God. We grew up being told that loving, same-sex relationships were shallow, lust-driven, deceived, disordered, and impossible.

We grew up with the repetitive message that LGBT people were not enough — not straight enough, not Christian enough, not manly or womanly enough, not faithful enough, not praying enough. Never, ever enough. “Toxic” probably sums it up best. That message is poison to the soul. Especially a child’s soul.

It can take a lifetime to get rid of that old programming and replace it with healthy, non-toxic views of yourself. Recovery from conversion therapy is difficult at best. Some remain forever scarred, emotionally and spiritually. Conversion therapy reinforces internalized homophobia, anxiety, guilt and depression. It leads to self-loathing and emotional and psychological harm when change doesn’t happen. Regrettably, too many will choose suicide as a result of their sense of failure.

In light of this, we now stand united in our conviction that conversion therapy is not “therapy,” but is instead both ineffective and harmful. We align ourselves with every major mainstream professional medical and mental health organization in denouncing attempts to change sexual orientation or gender identity. We admonish parents to love and accept your LGBT children as they are. We beseech the church to accept, embrace, and affirm LGBT persons with full equality and inclusion.

What do you think? Did they go far enough or should there have been some apology in that letter as well?

August 1, 2014
Quoting Quiverfull: Is Homeschooling the Answer to Temper Tantrums?
Next Post

August 2, 2014 Quoting Quiverfull: Cooking is Your JOB Woman!?
Recent Comments
3 Comments | Leave a Comment
"His first words give away the game. "I married a beautiful creature." Not person, not ..."
flexilis Complementarian Marriage and the Lies They ..."
"Ken and Lori, or someone else? I thought that it might be Lori based on ..."
Ally Complementarian Marriage, Abuse, Infidelity, and Unhappiness
""...martyrbate..."Tee Hee Hee. I like it!"
DoctorDJ It’s Sunday, Meaning Scofflaw Churches Are ..."
"The CNN story reminded me of a comment to a WaPo coronavirus story at a ..."
MuttsRule It’s Sunday, Meaning Scofflaw Churches Are ..."
Browse Our Archives
Follow Us!

Complementarian Marriage and the Lies They Tell Themselves...
I'm in a bit of a difficult position here. Something had landed...
view all Nonreligious blogs
What Are Your Thoughts?leave a comment
Copyright 2008-2020, Patheos. All rights reserved.