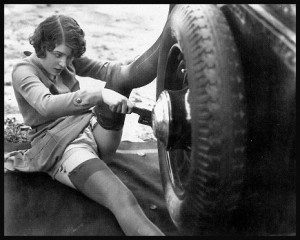 by Nathaniel Darnell of Persevero News – Women Against Feminism

“A man has no right to define for himself what his wife will do to please him. He must adopt Christ’s ideas, as revealed in Scripture, for what a wife must do to be a helpmeet to a husband and for what he must do to love her. Ephesians 5 tells us that this entails him giving up his life for her as Christ does for His Bride the Church. This involves a tremendous amount of unselfishness. It is a spending and being spent for her. What the authority of a man over his wife amounts to is that he is ultimately responsible for what goes wrong in his family. In the end of the analysis, no matter what the failures of his wife, he takes the blame. So it was was with Adam, and so it is with every man.

“Or, to put it another way, is the engine of your car less valuable than your steering wheel because the steering wheel controls the direction that the engine thrusts the car toward? No! Again, in terms of mere monetary value, a steering wheel is probably far less expensive than an engine!

“It is not a question of value, but of function. God is the Designer of the function. This is His world. His reality. He reveals how humanity is best to operate in His reality, and he specified that this is by a woman serving as a helpmeet to a man who is serving God.

“It is actually humanism, not Biblical Christianity, that demeans women. Because if the presuppositions of humanism are true, and value is only determined by might making right and survival of the fittest, then human culture will reduce women to chattel—and in fact that is exactly what other God-hating humanistic societies contemporary of Bible times did to their women. As Dr. R.J. Rushdoony wrote in his book Flight from Humanity: A Study of the Effect of Neoplatonism on Christianity, he said:

“ ‘In the Bible, women are presented as no less intelligent than men, nor any less capable of redemption; the question is one of authority, not of humanity or dignity, whereas in the neoplatonist [Greek] tradition women are seen at times almost as a different species or at best a very inferior form of man.’ (See page 13 of that book.)

August 21, 2014 When Love Isn't Enough: The Musser Family Tragedy Part 4
Recent Comments
24 Comments | Leave a Comment
Browse Our Archives
get the latest from
Nonreligious
Sign up for our newsletter
POPULAR AT PATHEOS Nonreligious
1