Editor’s Note: There have been some who’ve questions why NLQ is posting this series because they think it has nothing to do with what NLQ does. But the Musser story is the very thing that is the heart of this site, Kid-collecting Quiverfull evangelical Christian families that believe they are doing ‘God’s Will’ by having as many children as possible, yet failing to realize that by doing so they are parenting those same children in the most minimal ways possible. Sometimes this type of lifestyle and theology leads directly to tragedies such as the recent death of Tommy Musser. Had his mother been less burdened with caring for the huge number of offspring she had, two others that are also special needs, then perhaps Tommy might still be alive. The story of the Mussers is what Quiverfull is all about in its deepest failings. Tommy’s death is a direct result of this harmful theology.

One of the things we do at No Longer Quivering is track the destruction, devastation and death that result from the Quiverfull and Christian Patriarchal Movement. We plan on continuing that policy.

At the very least I hope his death opens a dialogue about adoption and how the laws and rules of adoptions should not be broken or bent for Christian families. They need to be held to the same standards as everyone else adopting. Tommy’s funeral will be held this Saturday in Lancaster, PA.

(Author’s Note: As I’ve been reading Susanna’s blog, I realized that their family has especially poignant reminders of how much as been taken from Katie and Tommy.   Katie is the same age as one of their biological daughters.  Tommy was born in the same month as one of their sons.  Verity is a wonderful example of how early intervention can help children with disabilities thrive and the youngest infant son, Benjamin, is already moving beyond Tommy in areas of social development.) 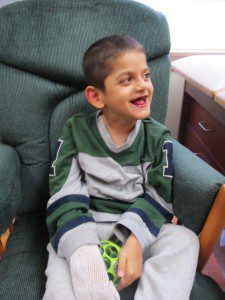 Even before Tommy’s death, the Musser family was grieving.  When a family lives with a child who has a disability, the parents go through cycles of grief involving denial, anxiety, fear, guilt, depression and anger.Susanna often alludes to guilt or anger, but always minimizes the feeling by explaining how lucky their family really is. In addition to a grueling schedule of therapists and daily care for 4 children with developmental ages under 4, normal care and home-schooling for four children with developmental ages between 5 and 8, and normal care and (possible) home-schooling for four teenagers between 11 and 18, Susanna was dealing with waves of emotions from both Tommy and Katie’s years of neglect and how that neglect destroyed their bodies and minds.By September of 2013, doctors had had enough time to run tests on Tommy to better evaluate his medical and long-term prognosis. Susanna explains “The more we learn about Tommy, the more it looks like his original disability was low muscle tone in conjunction with some chromosomal irregularity or other that would have caused some developmental delays similar to Down syndrome.

Later, Susanna explains “So many times unexpected hot tears have come to my eyes.  Sudden fierce grief and anger has risen within me at the dignity that was stripped from him, the potential that was stolen from his life.  He is clueless as an infant to so much of the world around him.  He is oblivious to his own vulnerability to the scorn of others.

I grieve for him because he cannot do it for himself.
I’ve stuffed it away without examining it, and kept moving.
But I wouldn’t be able to count how many times I’ve gazed into his face and wondered.
Who would Tommy have been, what would he be able to enjoy learning and knowing and seeing and doing if he had not had so much stolen from him?
He has no idea how to play appropriately with toys.  He completely missed that part of his childhood.  Without hand over hand assistance, he either shakes, taps, or drops toys to see whether they make noise. If he likes a toy, he’ll hold it up high, look at it, shake it, and shriek. If he doesn’t like a toy, he’ll drop it.
What he didn’t get is all the more painfully obvious to me as I care for him alongside Benjamin.
One small and surface-level example–
Ben tries to make eye contact with us when he wants our attention.  He begins to vocalize more and more as he gets sleepy, and if we don’t respond to his more polite requests, he eventually cries.  We meet most of his needs before he even has to ask for them, and we always respond gently and affectionately when he does ask.  Even if we know he’s just being cranky, we tell him reassuringly, “It’s okay, Ben!  You’re okay!”
When Tommy was a tiny baby like Benjamin, he asked, too, just like Ben asks.
But nobody responded.
If he was sad, nobody responded.
If he was cold, nobody responded.
If he was lonely, nobody responded.
If he was hungry, nobody responded.
If he was hurting, nobody responded.
If he had a dirty diaper, nobody responded.
If he was just feeling fussy, nobody responded.
Before too long, baby Tommy stopped asking.  For sixteen years, there was no point in asking for anything.
But even as soon as September, Tommy was showing progress. In Susanna’s words:
“Tommy is getting stronger, more energetic, more curious and motivated to move, more engaged in his environment, more vocal, more expressive of his emotions, opinions, and preferences.
He now asks.
He reaches out for affection and interaction.
We’ve learned to scan his surroundings for items he shouldn’t have, like doors that he will grab onto and bang over and over again, bowls full of food that he would grab and fling to the floor, or other people’s earrings!  We put couch pillows around the floor lamp so he can’t pull it over.  We brought our play yard out of storage to make a safe play space for him when and where it’s necessary.
When he’s sitting, he can swivel himself in a circle but not much else.  If he wants to move, he’ll go from sitting to lying down and then scoot along the floor fairly quickly on his back.  Recently, when on his back, he’s much more likely to go over to his side and try hard to pull himself up to a sitting position, especially when attempting to grab something that’s up just out of his reach.
A little over a month before Tommy’s death:
It’s a Sunday morning, tranquil and lit with a cool winter sunshine.
Ben is upstairs napping.
I rise wearily from the floor where I had been sitting with Katie, both of us still in our pajamas.
I’ve shed many tears lately.
Tommy is in his feeding chair, receiving a tube feeding.  I stop at his side.
Because he is well hydrated now, drool is often dripping down his chin.
Because of his tongue thrust, a crust of dried drool is often forming on his tongue and upper lip.
Because of the decay present in his mouth, both the drool and the crust are as foul-smelling as his breath.
For the dozenth time that day, I use a damp cloth to wipe the drool from his chin and work at the crust clinging to his skin.
I gaze mutely downward into the chocolate brown eyes of my son and he gazes mutely back up into mine.
Now my tears are streaming.
This task I have performed countless times without thinking is a holy privilege, as though my wounded Savior is allowing me to look into His eyes and wipe the crusted blood and stinking sweat from His face.
I wipe my tears on my shoulder and look downward into the chocolate brown eyes of my son, and he looks back into mine.
A strange joy mingles with the deep grief in my heart.
Welcome, Lord Jesus.

August 15, 2014 News: Jessa Duggar Officially Engaged
Recent Comments
64 Comments | Leave a Comment
Browse Our Archives
get the latest from
No Longer Quivering
Sign up for our newsletter
POPULAR AT PATHEOS Nonreligious
1