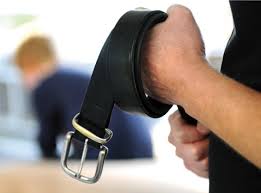 This Monday and Tuesday on the Dr. Phil show there was featured a man (Kirby ) that is a Fundamentalist Christian Patriarch type who’d spanked his wife Renee with a paddle for not calling him “Sir”. What he didn’t know was that his wife had videoed him disciplining her and eventually went to law enforcement with that video and others showing him physically disciplining their sons. He was arrested and now the wife has a no contact order against him.

Kirby made headlines — and spent 13 weeks in jail — after his wife of 26 years, Renee, videotaped him spanking her with a wooden spoon as discipline. Kirby claims Renee abandoned her religious commitment to be a “Proverbs 31 wife” by behaving disrespectfully, including spitting on him and swearing, so he felt he had no choice but to act as he did. Dr. Phil steps in with some stern words for this father of five.

First let me say that even as I watched this show I have zero regard for the counseling skills of Dr. He takes actions and makes remarks on his show that if he employed in a one on one counselling session that would get your counseling licensure pulled quicker than you can say ‘paranoid schizophrenic’. He’s schlocky, gimmicky and not that particularly smart. I’ve always thought his show was only a short step up from most of the other talk shows testing paternity and accusing relatives of sex with other relatives. Mindless entertainment for some folks, not for me.

This was one of those rare occasions when I didn’t change the channel after a few minutes. His guest, fundamentalist patriarchy Kirby, was insisting that his wife Renee needed to repent from disrespecting him, repent from taking the video of him, beg his forgiveness and come on home to resume being his Proverbs 31 wife again. The truly sad thing is that no matter how Phil phrased it, or said it straight to Kirby, he could not see how dangerously abusive his thoughts were. In Kirby’s mind he had every right, according to the Bible, to hit his wife and kids to keep them in line, deferring to him. He kept proclaiming that Renee was demon-addled and he was just spanking the demons out.

Kirby also committed what I personally consider one of the biggest cardinal sins those in and coming out of dangerous theology love to do: proclaiming that his wife Renee was a narcissist. She’d never been diagnosed with narcissism, and Kirby isn’t exactly a trained psycho-therapist trained to made diagnoses such as for narcissism. I’ve seen this arm chair quarter backing labeling of people others don’t agree with as ‘Narcissist’ for years now and it should stop. First of all, you’re just seeing that person usually in a very stressful point in their lives, or you yourself have formed an image of that person on limited information and have no more training than the average Kirby to make that diagnosis. Let’s drop the ‘narcissist’ label in recovery, if you must judge someone on their behavior it’s more accurate to observe that they have narcissistic tendencies than trying to label them a full blown narcissist without testing.

Dr. Phil missed a golden opportunity to inform the public that everyone has some narcissistic characteristics and it’s normal! It’s healthy to have a few bits of self interest. Whew, went down that rabbit trail, now back to the show.

Kirby kept asking Phil what he should have done when Renee cursed at him, and spit upon him, instead of hit her. For once Dr. Phil had a pretty decent list of suggestions that Kirby could have used to defuse the situation, the best one being to walk away from her until she was rational and calm before attempting to discuss why she was unhappy with him.

Below is Monday’s episode featuring Kirby and his straight out of the Christian Patriarchy Movement beliefs.

Most of that hour had a freak show aspect to it, not much different than Maury Povich’s ‘Are You The Father?” shows or Jerry Springer’s show, and was unhelpful at worst, but did expose the bigger problem of the toxic beliefs held by many patriarchal Christian types. That old ‘might makes right’, that they think you literally ‘own’ the people in your family and can treat them any way you wish, that the physically biggest and most violent member of the family controls everything by physically harming or bullying everyone smaller and less physically powerful, and teaches that violence is the way to settle issues.

In a world where Lydia Schatz and Hanna Grace Williams were disciplined to death by parents using Michael Pearl’s book ‘To Train Up A Child’ and where the biggest recent news stories have been Adrian Peterson’s child abuse disguised as discipline and Ray Rice’s spousal abuse I think it’s time that we brought this entire issue of physical violence in families to the fore front of discussion. It’s time for people to realize hitting is not love, it’s abuse, it’s anger, it’s violence and that it has long lasting effects on people, damaging a part of their soul they’ll never get back.

After the fascinating hour on Monday Dr. Phil’s Tuesday show, where he spoke with Kirby’s wife Renee, was a huge disappointment. Instead of continuing on with the theme that good men do not beat their wives for any reason, Dr Phil in his interview with Renee got onto her for asking one of her children to hold the cell phone while she was being spanked. He acted like that was a manipulative wrong thing to do yet never mentioned the most heartbreaking part of the entire beating on video, the fact that you can clearly hear the children in the background crying because they were witnessing their beloved mother being beaten by their father.  To me that was the most awful bit, you cannot help but feel for those children, being exposed to that type of trauma as children will stay with them forever.

And this is Tuesday’s show with Renee.

By the end of the segment Dr. Phil’s answer was a spectacularly awful option. He wants to send Kirby to a Christian Counselor to work out Kirby’s issues. That is such a complete cop out on the part of Dr. Phil considering how widely the effectiveness, educational levels, experience and real help can vary in the world of Neuthetics. Recently Kathryn Joyce wrote an article on the dangers of using a Christian counselor.

I’ve had my own personal horror stories of my poor husband going to various Christian counselors during his years long bout with depression. As we went from Christian counselor to counselor the answers were always the same, either he was told he was being ‘selfish’ and not trusting in God, or he was told that I was not submissive enough or whatever enough and that was the cause of his depression. In reality he had tumors on several of his parathyroid glands and that was driving the depression. It was physical, chemical, and not one of these so-called ‘experts’ advised my poor husband to get a complete physical where it might have shown up by his insanely high calcium levels in basic blood tests. Nope, better to blame that depression on lack of faith or someone else than to rule out physical causes first.

This has made me extremely skeptical of any Biblical based counseling. Knowing how Kirby believes for Dr. Phil to pay for a Christian counselor is about as useful as trying to roller skate on a train track.  It just doesn’t work.

If nothing else the show was a good lesson in why you go to a highly recommended real psychologist, social worker or psychiatrist instead of going on a television talk show to solve your problems. At least middle America got to see what the Christian Patriarchy Movement is all about.

I think it’s time as a nation that we stopped ALL violence wrapped in the innocent name of discipline. No tolerance for abuse. This is a problem and we must address it and move on into a future where children, women and yes, even men, no longer have to fear abuse and possible death at the hands of those they love.

September 25, 2014
Quoting Quiverfull: No College Unless Daughter's Motive is 'Right'?
Next Post

September 26, 2014 Quoting Quiverfull: Change Your Attitude Woman!
Recent Comments
37 Comments | Leave a Comment
"This is late, partly bc of my preoccupation and partly bc I'd been slowly reading ..."
Jennifer Serena’s Serenity – Luxury Hotel, Birthing ..."
"Thank you for your commitment to truth and love, Suzanne. Best wishes to you and ..."
Meredith Anne Not a Goodbye, More of a ..."
"For your sake, I am so glad you will no longer be editing and managing ..."
Lana Not a Goodbye, More of a ..."
"For what it's worth, I've learned a lot from you about a Very Creepy movement ..."
Gwen Pryce Not a Goodbye, More of a ..."
Browse Our Archives
get the latest from
Nonreligious
Sign up for our newsletter
POPULAR AT PATHEOS Nonreligious
1