Preparing To Be A Help Meet: Three Types of Women – Part 2 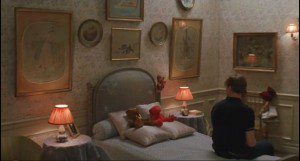 “That introduces another question:”Well, if women are created in the image of man, and man comes in three types, are women created in different types?” We are…sorta. Since we are females, I like to call us a more feminine version of Prophet, Priest and King.  I’ll call us girls Dreamers, Servants and Go-to Gals.  “
At this point, Debi introduces a chart to help readers keep track of all of the different names.  From a pedagogical standpoint, if you need a chart for readers to keep up with a personality system, your system is way too complicated.
“I’m a Dreamer, similar to the Prophet type.  A female’s type is not as predominant as a man’s.  Remember, man was created in God’s image and we in man’s image, so we are one step removed from the original, which, thankfully, tempers our extremes. “

What a strange little heresy.  Debi’s  invested in separating women from God – even though Genesis 1:27 contradicts her entire premise.
” Are you a Dreamer?  Do you like to create, sew, design, paint or write? “
I like to create new microscope slides of plants.  Does that count?
“The little three-year-old girls that love to dress up like ballerinas or princesses are the Dreamers. “
Quick!  Find someone who remembers what you liked to do when you were a three year-old.  If you can’t find that person, you’re screwed.

” If you are a Dreamer, then you need to keep your head out of the clouds while dancing your way into your vision of the future.  Don’t get involved in projects that take you away from your responsibility to honor your husband.”
What does that last sentence mean? Is Debi talking to married women or unmarried women?  If you aren’t married, how are you supposed to guess which projects will be useful to your future spouse?
To use an example from the CP/QF world, Genevieve Smith married Pete de Deugd.  Genevieve’s family was involved in webpage design; Pete runs a woodworking and metal shop.  In her words, she had a lot to learn.

Genevieve probably should have spent her youthful years learning how to use power tools, welding and electrical engineering.  Instead, she learned how to make webpages.  What on Earth were her parents thinking!  I mean, obviously, they should have been training her in advanced welding to help her future husband.

Geez.
I mean, my parents taught me how to milk cows, deliver calves AND care for poultry while living in the city since my future husband was a farmer….oh, wait….no.
My parents made sure I had a good education, access to a college education and the freedom to follow MY interests.  Plus, I got to pick my own husband which we all agree was a good choice.
“Spend your youth honing your gifts and developing skills.  Someday, if you honor your man, your gifts will greatly benefit your marriage. “
The two biggest assets that I have brought to the farm when I married: interpersonal management skills that I learned in years of working outside of the home and the Biology/Chemistry knowledge that I learned in my college education.  I doubt Debi would recommend either in her book – but both have been extremely helpful in learning about the farm and giving advice on some management techniques.

So, yeah.  Just follow your instincts, ladies.  Ignore Debi.  I’ve never followed any of her advice and my life is pretty good.
“Girls that are Dreamers have a tendency to become Antsy Girls when things don’t seem to be happening as fast as we think they should.”
Um….’k.  That’s a random term that we’ve never heard before in the book.
“An example of a Prophet in Scripture would be Elijah.  Remember that he is the man who called down fire from heaven.”
Yup.  That’s ALL that matters about Elijah.  No real importance to the Jewish or Christian religions – but he RAINS FIRE!
I question if Debi has read her Bible because she’s making a lot of stupid mistakes in this section.

“Most, though not all, Old Testament prophets are Prophets in nature.”
Yes, because you defined the Prophet-type as Prophet-like.  Logic.  Please study it.  These sentences are killing me.
” It is not as easy to identify the female of the Prophet/Visionary/Dreamer, no doubt due in part to the fact that there are fewer women featured in the Bible.  There are several obviously negative examples of the Prophet-natured woman.  The most prominent is Delilah.  Her story is found inJudges 16.  She was the object of Samson’s tender feelings, as well as his uncontrolled lust.  The story of Delilah is that of a wicked woman of Samson’s strength.  When he repeatedly refused to reveal his secret, she put on her acting charm.  She wept, brokenhearted, blaming him for not trusting her with the secrets of his heart and therefore not loving her.  It worked.  He was deceived into telling her his secret lay in a covenant he had with God, the sign of which was his long hair.   At the first opportunity she sheared his head, leaving him powerless.  He paid with his eye-sight and then his life.  “

I’m amazed how Debi makes this Delilah’s fault.  Samson tells Delilah three separate lies about what would make him weak.  Delilah immediately tries each of the three things on Samson.  It doesn’t take a genius to realize when Samson tells Delilah that shaving his head would make him weak that she shaves his head.
Minor quibble: Samson did pay with his eye-sight.  His death was his choice.  He asked God to give him his strength back so he could pull down the building he was in and kill a bunch of people and asked to die with them.  Easy-peasy to see if you’ve READ the Bible.
“Sorry for all you Dreamers for the negative example.  I can think of some really cool ladies who are Dreamers, which includes me, of course.”
I hope most Dreamer women have better lives than Debi does.
AntiPearl:Follow your dreams. Just make sure to have fun too.

September 17, 2014
Quoting Quiverfull: The Ray Rice NFL Scandal Is A Good Opportunity To 'Spread The Gospel'?
Next Post

September 18, 2014 Quoting Quiverfull: Keeper of Seeds?
Recent Comments
15 Comments | Leave a Comment
"This is late, partly bc of my preoccupation and partly bc I'd been slowly reading ..."
Jennifer Serena’s Serenity – Luxury Hotel, Birthing ..."
"Thank you for your commitment to truth and love, Suzanne. Best wishes to you and ..."
Meredith Anne Not a Goodbye, More of a ..."
"For what it's worth, I've learned a lot from you about a Very Creepy movement ..."
Gwen Pryce Not a Goodbye, More of a ..."
"Unfortunately, this kind of satire (if it even is satire) is what gives Christianity the ..."
Emily Is Biblical Gender Roles a Big ..."
Browse Our Archives
get the latest from
Nonreligious
Sign up for our newsletter
POPULAR AT PATHEOS Nonreligious
1

Why the Gospel Doesn't Work on...
Godless in Dixie
Related posts from No Longer Quivering