Quoting Quiverfull: The Ray Rice NFL Scandal Is A Good Opportunity To ‘Spread The Gospel’? 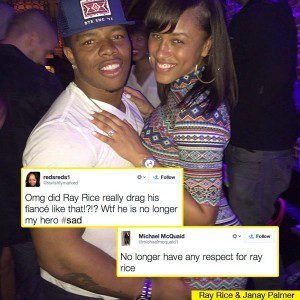 For those of you who don’t follow the news or football or NFL let’s summarize this: Ray Rice, running back for the Baltimore Ravens NFL team, beat his then fiancee and was suspended for a couple of games until the website TMZ posted the video of the incident. In the video Rice hits his fiancee so hard she’s knocked unconscious in a hotel elevator before he drags her out of frame. After the NFL was chided for their slap on the wrist of Rice they then suspended him indefinitely and the Baltimore Ravens team cut him from their team.

Between this and the situation with Adrian Peterson and others in the NFL only receiving punishment when the media makes a stink about players committing criminal acts it’s clear that the league covers up for their own. The NFL needs to come up with a consistence behavior guidelines and stick to them in the future obviously but in the meantime Voddie Baucham sees this as a chance to witness to non-believers and has some interesting, sometimes poisonous, things to say about the issue of domestic abuse.

“Ray Rice cut by Ravens, suspended by NFL indefinitely” This was because of the video… NOT the morality of the NFL

Again, what is the standard? Where do we find the list of ‘sins’ that are worthy of such treatment by the NFL? Where does this end? What about serial adulterers who father children and don’t care for them? What about abusers of drugs and alcohol (who currently get more chances than Rice got)?

I’m all for morality. However, in a culture that has adopted the postmodern ideal… In a culture that constantly asks Christians, “Why is it alright for you to pick and choose from the Law of Leviticus”? I think we need to demand an explanation as to why it is suddenly acceptable to drop the hammer on those who hit women or say bad things about preferred minority groups, but it’s evil to say that homosexuality is a sin.

This is a great gospel opportunity! It’s an opportunity to show people that they actually DO agree with us on the need for an objective standard of morality. They DO agree that it is acceptable to enforce such a standard publicly. They DO agree that it is acceptable to call sin sin in an open, public way. Now we just have to show them that their standard is personal, subjective, unreliable, and inconsistent, while ours is founded upon the changeless, timeless, perfect Word of God.

Get out there and engage!

After some dissension by his followers he had this to say:

I think there’s a bit of hypersensitivity going on here. A couple of you have jumped on the “The Church is not doing enough about domestic violence” bandwagon, which demonstrates a disconnect. Please note that I said, “This is a great gospel opportunity! It’s an opportunity to show people that they actually DO agree with us on the need for an objective standard of morality. They DO agree that it is acceptable to enforce such a standard publicly. They DO agree that it is acceptable to call sin sin in an open, public way.”In other words, I am not saying knocking your girlfriend out in an elevator is ok… I’M SAYING THE EXACT OPPOSITE!!! Don’t be so sensitive that you find foes where you have friends! Don’t be one of those people who thinks, “If he says or does ANYTHING other than condemn Ray Rice, then he’s not on the right side of this.” This is not about whether what happened was sinful. No one questions that. This is about whether we believe in objective morality, and whether a reactionary decision by the NFL is something to celebrate. The can of worms that was just opened will have severe consequences. It also gives us an opportunity to engage on the apologetic front. And, yes, it gives us an opportunity to address domestic violence… Not an emotional, reactionary, PC conversation, but a real gospel-centered, fact-based discussion.As a pastor, I’ve had to deal with this on more than one occasion. This is not an issue about which most pastors are ignorant, or silent. It’s easy to blame/bash the church. However, that’s neither the cause, nor the cure in this case.

First, this is NOT a strong message against domestic violence. If it were, the tape would not have been necessary. This is a message against embarrassing the NFL.Second, my point still stands. There is no objective standard here.Third, abusers do NOT just “target good, nice, kind, Christian women.” They target bad women, mean women, Muslim, Hindu, and Buddhist women…Fourth, I agree that we need to continue the discussion about domestic violence. And that needs to include the fact that women are the perpetrators of violence in half or more of the domestic cases (see here:http://womensenews.org/…/women-are-aggressors-in…). This is NOT a ‘men abuse women’ issue.Sloganeering and victimology must not be substituted for honest discussion about this sin that plagues both men and women. And I have a very realistic, informed view of the prevalence and nature of the issue.

What do you think dear readers? Does Voddie have a legitimate point or is he verging into victim blaming or spiritual abuse here?

September 17, 2014 Preparing To Be A Help Meet: Three Types of Women - Part 2
Recent Comments
40 Comments | Leave a Comment
"This is late, partly bc of my preoccupation and partly bc I'd been slowly reading ..."
Jennifer Serena’s Serenity – Luxury Hotel, Birthing ..."
"Thank you for your commitment to truth and love, Suzanne. Best wishes to you and ..."
Meredith Anne Not a Goodbye, More of a ..."
"For what it's worth, I've learned a lot from you about a Very Creepy movement ..."
Gwen Pryce Not a Goodbye, More of a ..."
"Unfortunately, this kind of satire (if it even is satire) is what gives Christianity the ..."
Emily Is Biblical Gender Roles a Big ..."
Browse Our Archives
get the latest from
Nonreligious
Sign up for our newsletter
POPULAR AT PATHEOS Nonreligious
1