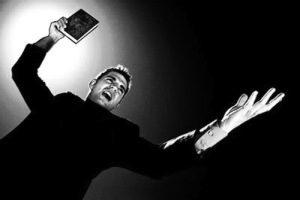 Ok, so I read four pages of Real Marriage this morning. There’s eleven chapters, so with that plus covering the preface and introduction today, I’m going to try to wrap this up in three months and avoid as much of the “multiple weeks dedicated to one chapter” thing that happened a few times with Captivating. I don’t think you or I could handle it.

Like Fascinating Womanhood and Captivating, Real Marriage will inevitably have statements that I agree with, mostly because they’re common sense. And, the first time I read these pages this morning, I thought I could agree with a good portion of what he said in the preface, which is subtitled “How Not to Read this Book.” And then I read it again, and even with some of the things that I started out kinda-sorta agreeing with, I have a few problems.

Don’t read sections of the book and tell your spouse, “I told you so.” This book is not meant to be a pile of rocks for you to throw at each other in bitterness.

That feels fairly common-sensical, right? In general, “I told you so” isn’t a statement that’s going to help bring healing and friendship back to a damaged relationship. No one enjoys hearing something like that. But, when I chewed on this for a little bit, I stumbled into a question: what else are you supposed to do with a marriage-advice book? Maybe not use the words “I told you so,” but if you and your partner are experiencing problems that you’ve tried to talk to them about before, and a book you read describes what you feel the problem is … isn’t pointing to a chapter and saying something like “this really made sense to me” or “I feel this way” or “she said what I’ve been trying to communicate really well in this chapter” something that will justhappen? And isn’t that . . . sort of the point?

And I don’t think Mark would outright forbid someone from doing that– he just forbids us from doing it “in bitterness.” Which puts a horrible burden on someone who’s experienced a lot of hurt from their partner. Being honest for the first time can be messy and painful, and I feel that Mark might be trying to force happy-happy-joy-joy expressions onto people who are feeling raw.

There was one “Do Not” that struck me as both amusing and troubling:

Don’t read as a critic trying to find where you think we might be wrong. Although we seek to be faithful to the Bible, this book is not the Bible, and, like you, we are imperfect, so there will be mistakes. Take whatever gifts you find in this book, and feel free to leave the rest.

I didn’t exactly laugh when I read that– I snorted and smirked and rolled my eyes. A “mistake,” Mark, really? Like, oh, I don’t know, calling women “penis homes”?(Note: I do not agree with the title of that article, which implies a cause-and-effect relationship that doesn’t exist.) The problem is, I’m not going to find mistakes in this book. I’m going to find sexism and misogyny and since there are chapters dedicated to sexual assault, probably heaping, steaming mounds of victim blaming and rape myths. Those things are not mistakes. They are wrong, and the beliefs that Mark and Grace hold are directly responsible for churches excusing domestic violence and marital rape.

The last “Do Not” of the preface is probably going to be something I comment on a lot as we move through this book. In the opening salvo of Captivating, Stasi Eldredge tried to make it clear how different her book was from other “how to be a godly woman” books– she wasn’t going to give us a list. She was just going to show us . . . well, what turned out to be a rather gigantic list, although the items on it were more abstract that Helen Andelin’s “wear chiffon and florals.” Mark is doing the same thing:

Don’t copy our methods. The principles in this book are more important than the methods. Principles are timeless and unchanging. Methods vary from marriage to marriage and person to person. Many marriage books focus too heavily on methods that worked for one couple’s marriage, but because you and your spouse are unique, those methods may not work for you and your marriage.

On its face . . . there isn’t a glaring problem here, and I can agree with a surface-level interpretation of what he’s saying. However, when he says “principles,” what he means is complementarianism, which is, by definition, a method, so … yup.

What the Introduction makes clear is something we already knew: Mark is obsessed with sex. I counted, and in one-and-a-half pages, there are seventeen references to sex, including one mentioning how sexualized our culture is. Also, Mark wants to make sure that we know how incredibly experienced he is at the ripe old age of 41 (at time of publication), and how he’s a pastor so that means he knows stuff.

In fact, the whole section reeks, at least to me, of the “touch not the lord’s anointed” bullshit that I grew up with. It’s possible I’m being overly sensitive to that, but I don’t think so, not with “YOU ARE NOT ALLOWED TO CRITICIZE ME” showing up on the first page.