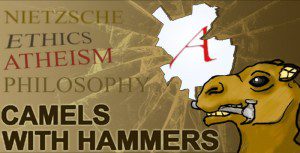 Our good friend M. Dolon Hickmon has a guest post up at Dan Fincke’s site Camels With Hammers called ‘Breaking The Generational Cycle of Child Abuse’  For those of you that don’t know Mr. Hickmon he is also the author  of a powerful novel based upon some of his personal experiences of growing up in an abusive religious family – 13:24 – A Story of Faith and Obsession If you haven’t read his book yet then I cannot emphasis strongly enough how good it is! He also writes for The Freethinker and On Faith.

Below is a snippet from his post at Camels With Hammers

Rooted in the same scriptures passages and traditions, our pastor’s doctrines of thirty-plus years ago had much in common with the current teachings of Christian “experts” like Michael and Debi Pearl. My indomitable mother was ordered — by “God” — to submit to her abusive husband. Her first duty was to never to “provoke” him — a feat that was impossible, short of literally removing oneself from his presence. Her second duty was to never question him — even when he was in the midst of physically abusing her and her children. Her third duty was to protect her children from abuse, not by intervening when they were abused, but by training them to behave in way that gave their father no reason ever to fault them.

My father received corollary messages: As husband and father, his decisions were above being criticized by anyone but God. It was improper for him to Lord his authority over his family, but not nearly as improper as their having dared to question or provoke him in the first place. Equally ill-suited to the particulars of our family’s circumstance was our pastor’s advice on child discipline. Rather than curing what was at that time relatively minor abuse, the church’s instructions turned our home into a gulag.

October 2, 2014
Quoting Quiverfull: Stay At Home or Have an 'Unworthwhile Life'?
Next Post

It's official: Trump's 'gift from God' Covid-19 drug...
IN March President Trump announced  that  administration was working to dramatically expand...
view all Nonreligious blogs
What Are Your Thoughts?leave a comment
Copyright 2008-2020, Patheos. All rights reserved.