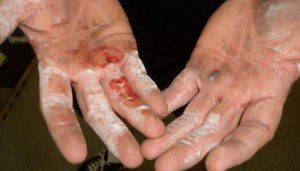 by Michael Pearl from No Greater Joy – Freedom From Addictions

While there may be a few grains of truth in Michael’s blathering he ruins it by jumping to some pretty big conclusions later. He still believes that women are not consumers or pornography. Also, is he *really* paying that much attention to the hands of other men?

I have spoken publicly thousands of times and shaken the hands of tens of thousands of men, often asking them what they do for a living. A brief handshake reveals the kind of labor a man does. I can tell the difference between a welder and a brick layer. A welder is thicker on the ends of his fingers, whereas a brick layer has strong thumb and index finger muscle. I can tell if a man is a carpenter and whether or not he is frame carpenter or a trim carpenter. Farmers are obvious by their longer fingers and the development of the fingers as a whole, but not the thumb. Computer geeks, clerks, and accountants are obvious for their lack of muscle and calluses on the tips of their fingers. Mechanics have strong hands without any particular part being distinct. The strongest hands of all are block layers and stone masons. A man who acquired his muscles through work will be the strongest in his hands, then his wrist, then his forearms, and finally his biceps, whereas a man who acquires his muscles by working out with weights will be strongest in his shoulders and biceps and weakest in his hands.

Neuro pathways are the brain’s “fiber optic” communication conduits. When you do a thing repeatedly, as in golfing or playing a video game, your brain develops strong neuro pathways. These more developed regions and pathways of communication become the default position, the easiest to access and initiate. Muscle memory is a fact, as is habit memory, and pleasure memory.The brain is wired to steer you to repeat that which is pleasurable and avoid that which is not. I will oversimplify it by saying that the brain, like a computer, communicates digital information by means of electrical impulses, and stores that information in negative and positive charges to be retrieved as needed. But it also communicates happiness or sadness by means of chemicals. You have heard the term “dopamine rush” to express sudden surges of pleasure. There are four happy chemicals—dopamine, serotonin, oxytocin, and endorphin—that are released in the brain in various amounts to mark moments and events that are pleasurable. But life is not all pleasurable. There are reasons to be cautious, concerned, afraid, and to feel unhappy with circumstances. Unhappy chemicals, like cortisol and epinephrine, stir us to action, creating emotions which drive us to take steps that secure our safety or happiness.

Your brain not only stores the facts of events, it also stores the emotions associated with those events. So the next time a drug addict sees a needle, or a drunk sees a bar, his brain releases pleasure chemicals that prompt him to repeat the former pleasure. If he does not give in to the chemical prompting, unhappy chemicals are released that make him feel miserable. The only way to get relief is to repeat the addiction. He is locked into a war of chemicals centered in his addicted brain. His brain compels him to get back to the source of extreme pleasure and avoid the discomfort of a release of unhappy chemicals.

Substance addiction is an artificial stimulation of the brain’s natural release of dopamine and other pleasure chemicals. It hijacks the system and accelerates an otherwise natural process. As a base line, intercourse releases about 100% dopamine—the highest natural release. Happy, normal, non-addictive living releases dopamine in the 10% range. Alcohol releases 100-200%. Meth releases 1250%, and lasts for eight to twelve hours, whereas a cocaine high lasts only about one or two hours.Dopamine released by wholesome feelings of success or pleasure quickly abates in a matter of seconds or minutes. When one overstimulates his body and brain with excessive pleasure, as in drugs or pornography, the brain reacts by shutting down the brain’s production and release of pleasure chemicals and increases the release of unhappy chemicals so as to maintain a balance. It is similar to losing your hearing by listening to loud music. Over time the brain is altered so that it takes more of the same, higher doses, to induce the brain to pleasure. The drug addict needs more drugs more often. The shopper needs more and more shopping until it becomes a compulsion, and the pornographer needs darker and more deviant content to get the same high out of the experience.

Simone Kühn, in a German study reported in JAMA Psychiatry, says, “Men who report watching a lot of pornography tend to have less volume and activity in regions of the brain linked to rewards and motivation.” The report concludes that the more pornography a person consumes the less responsive they are to sexual stimuli. In time the addict increases his compulsion while his pleasure diminishes. He becomes a bigger hole that needs filling and continually suffers with the inability to find satisfaction. He becomes an itch for which there is no scratch. And the downward spiral has no bottom.

October 29, 2014
Quoting Quiverfull: Homeschool Because Gays and Muslims?
Next Post

October 29, 2014 Jessa Duggar's Wedding & Assorted Duggar News
Recent Comments
7 Comments | Leave a Comment
"This is late, partly bc of my preoccupation and partly bc I'd been slowly reading ..."
Jennifer Serena’s Serenity – Luxury Hotel, Birthing ..."
"Thank you for your commitment to truth and love, Suzanne. Best wishes to you and ..."
Meredith Anne Not a Goodbye, More of a ..."
"For your sake, I am so glad you will no longer be editing and managing ..."
Lana Not a Goodbye, More of a ..."
"For what it's worth, I've learned a lot from you about a Very Creepy movement ..."
Griff Pryce Not a Goodbye, More of a ..."
Browse Our Archives
get the latest from
Nonreligious
Sign up for our newsletter
POPULAR AT PATHEOS Nonreligious
1