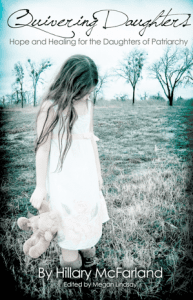 While still in the denial stage of dealing with their adult children’s experiences of emotional, mental, and spiritual abuse, Quiverfull parents often get distracted with attempts to define “abuse” or make comparisons and to say, “You don’t realize how hard I had it when I was your age!”

I remember thinking that if my kids had any idea what level of dysfunction I had survived, they would feel grateful rather than resentful. I wanted them to see things from my persective, all the while being so full of my own viewpoint that I could not/would not consider how our situation felt from their point of view.

So what is “abuse” and who gets to define it? Steadfast Daughters devotes a considerable amount of time and mental energy to this question. The trouble with making definitions central to the discussion is this: there’s no way to do it without being condescending, petty and dismissive of Quivering Daughters who are reporting their highly personal, and necessarily highly subjective experiences of emotional and spiritual abuse.

There is no objective way of defining and quantifying “abuse” ~ no way. Sorry. Try it if you must ~ but you will lose.

Too many factors affect our perception and judgment. We all perceive the same experiences differently ~ it can’t be helped since no two people are all alike. It is even possible for the same individual to perceive the exact same experience differently depending on mood, health, energy-level, etc. One day the dish water is too hot and scalds our hands ~ next day, same temperature ~ but we’re freezing and this time it feels good. We have different levels of pain tolerance, our focus and ideals change making once appreciated behavior suddenly intolerable, memories fade, memories emerge … there’s really no way to predict ~ and there is no way to control.

Quiverfull moms want their daughters to feel secure ~ unaware, perhaps, that to the daughters, “security” is associated with prisons and confinement. Daddy wants to protect his girls ~ his daughters feel controlled and possessed. QF parents enforce standards of modesty ~ thinking this will affirm their daughters’ worth and instill a sense of value and self-respect ~ instead, their daughters feel like freaks and just want to be normal ~ rather than feeling modest, they feel that they are drawing unwanted attention to themselves because they cannot blend in with a crowd.

Consider too, that the majority of first-generation Quiverfull Believers were saved out of horrific backgrounds ~ their childhood was often SO outrageously dysfunctional that as children they longed for and would have been exceedingly grateful for the sort of lifestye which they’re providing for their own families.  Let me explain.

Compared to the creepy “step-dads” who raised me, Warren was a total sweetheart.  He didn’t drink or use drugs, he didn’t gamble away our grocery and rent money, he didn’t cheat on me, never flew into jealous rages, never drug me across the floor by my hair or kicked me in the ribs with cowboy boots as I’d seen Mom’s boyfriends do to her.  True, he yelled A LOT ~ and he was exceedingly nit-picky ~ yes, he made us all crazy with his endless lectures ~ and he micro-managed all of our lives right down to our thoughts and intentions.  In fact, in most ways, he acted as though he was God to us ~ every aspect of our lives revolved around him ~ or else!  But, hey ~ at least he wasn’t wanted for murder like Mom’s old boyfriend, Spider!  And to make it all the more complicated, none of us doubted that Warren loved us.

My children did not grow up with the same chaos that I did ~ they were raised in a loving, Christian home.  They did not have my tiny measuring stick by which all that was necessary to pass muster was that a man not try to kill or rape his wife and children.  So they did not feel grateful that Dad was not in prison or dead from a drug overdose ~ they only felt oppressed and tyrannized based on THEIR experience.  Their natural boundaries and self-protective mechanisms had not been obliterated through years and years of extreme abuse ~ which means they remained sensitized to their father’s inappropriate behavior which ~ though mild by comparison to much of what my mother, my sister, and I were subjected to ~ was nevertheless very real and seriously damaging abuse.

Here’s another thing ~ none of the neglect and abuse which I dealt with as a child was tied up with my spiritual well-being.  I was not raised in a Christian home ~ and although I did know that God wanted me to honor my parents ~ I never felt that they represented God to me or that disobedience and defiance of parental authority was equal to rebellion against God.  When those who are supposed to be nurturing and loving hurt you ~ that alone is devastating enough ~ but when you mix in God and concern for your eternal soul ~ it’s really too much for any child to process.  There are no words to describe the pain and confusion.

The bottom line for Quiverfull moms: if your daughter feels and believes that she has been misused, abused, or neglected ~ IT’S A PROBLEM.

When our daughters tell us they’re hurting ~ we need to listen to their complaints; keeping in mind that the primary reason for living the Quiverfull lifestyle is to spare our children the trouble and turmoil of an abusive family life. We hated the chaos of our own abusive homes ~ it made us feel horrible and we vowed not to put our own children through that kind of misery. If they’re telling us they feel horrible too ~ it’s time to stop and reconsider if what we’re doing truly is the means of achieving our goal. The ideals we’re counting on to assure our daughters’ well-being must never become more important than our daughters’ actual well-being.

All this is not to say that Quivering Daughters’ charges of abuse are merely a matter of perspective ~ only to say that THEY ARE THE ONES who get to determine whether they have been abused. In part 4, we, the ex-QF moms of NLQ, will share specific examples of how we hurt and harmed our children because of the abusive QF/P teachings which we believed and practiced on our children.

We have already discussed Steadfast Daughters on the old NLQ forum ~ comments for this post are open below.

October 15, 2014
Quoting Quiverfull: Disagreeing With Pastor - You Should Suck It Up and Shut Up?
Next Post

October 15, 2014 Preparing To Be A Help Meet: Three Types of Woman Part 4
Recent Comments
7 Comments | Leave a Comment
Browse Our Archives
get the latest from
Nonreligious
Sign up for our newsletter
POPULAR AT PATHEOS Nonreligious
1